If your study includes protein interaction analysis, there are several techniques at your disposal. In addition to proximity ligation assay, I'd like to also introduce BRET and FRET throughout the next 2 weeks.

Coming from a G protein-coupled receptor (GPCR) lab that characterized the dopamine D1-D2 receptor heteromer, my lab relies heavily on BRET and FRET.

I went back to the lab and chatted with our BRET/FRET guru, Ahmed Hasbi, PhD, for this article series.

Ahmed is currently a Research Associate at the University of Toronto, and he has over 10 years of experience working with both BRET and FRET.

Let's begin by hearing about BRET! 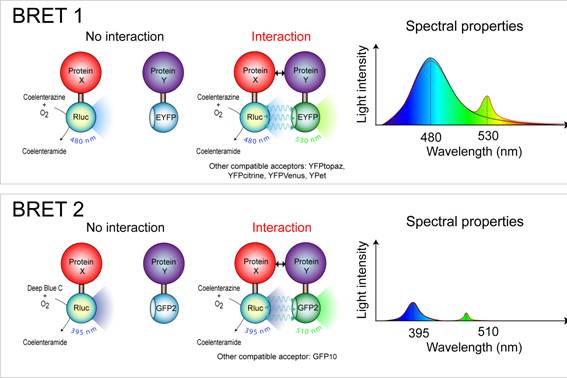 BRET, or Bioluminescence Resonance Energy Transfer, is a cell-based assay for studying protein-protein interactions. BRET relies on Forster resonance energy transfer from a bioluminescent donor to an acceptor in the presence of a substrate.

The distance required for the resonance energy transfer to occur (less than 10nm) correlates well with most biological interactions, making BRET ideal for examining macromolecular interactions.

As BRET does not require external light source to excite the donor, it has very low background and does not suffer from issues often associated with FRET (more on this in our next article), such as autofluorescence, light scattering, or photobleaching.

Interestingly, BRET is a naturally occurring phenomenon in sea pansy.

How Does It Work?

The proteins in study are first engineered to fuse with a donor or an acceptor and are transfected in cells.

The donor and acceptor used in a typical BRET experiment are Renilla luciferase (Rluc) and GFP, respectively. In the presence of its substrate, coelenterazine, Rluc oxidizes it into coelenteramide with concomitant light emission at 395nm, which is then captured by the GFP. Excitation of GFP in turn emits a green light at 510nm.

The intensity of light emissions by Rluc and GFP are measured in the BRET machine, and the ratio of GFP over Rluc is measured as the BRET signal.

What Are Some Variations of BRET?

Since its inception in 1999, several variations of BRET have been developed, each varies in the type of enzyme substrate and the nature of donor/acceptor pairs.

Use for: BRET saturation assays

This generation has relatively poor spectral resolution, as the difference between Rluc and YFP emissions is only ~45-55nm.

Use for: Screening assays that require high signal-to-noise ratio

Use for: Protein interactions that cannot be detected by BRET2

Use for: Detecting protein interactions in deep tissue of living animals

Advantage: QDot can be excited at any wavelength from UV to 530nm, and the emission can cover spectrum from blue to infrared depending on its diameter

Disadvantage: The large size of QDot (1.5-6nm) can affect protein interactions; QDot cannot be expressed in cells but has to be added

Use for: Clear separation of emission peaks make it ideal for screening applications

Disadvantage: The orientation of the proteins in study could prevent the proper complementation and formation of Rluc8 even when the proteins are indeed physically interacting

Use for: Currently only published for studying the functional selectivity of GPCR dimers

What Are Some Applications of BRET?

Originally developed to study the interactions of circadian clock proteins, BRET has grown to be a popular tool for studying the activation and oligomerization of GPCRs. It has also been used for:

In summary, BRET is an ideal tool to study protein interactions in cells, with many variations each suitable for specific experimental conditions and goals.

In the next article, we will discuss the step-by-step BRET protocol on things to watch out for.