In the recent Antibody Applications series, we've covered 2 techniques that are ideal for studying protein-protein interactions: PLA and BRET.

Continuing on this topic, I will introduce a third technique to be added to your repertoire for protein interactions studies, known as FRET, or Fluorescence Resonance Energy Transfer.

How Does FRET Work?

The phenomenon of FRET is not mediated by photon emission (non-radiative), and is analogous to the behavior of coupled oscillators, such as a pair of tuning forks vibrating at the same frequency. Hence, FRET can provide information concerning the structural orientation of the donor-acceptor pair.

It is important to note that FRET is a qualitative measurement and not a quantitative one, due to the small window of distance between the fluorophores required for a FRET signal and the signal-to-noise ratio available for most applications in cell biology. 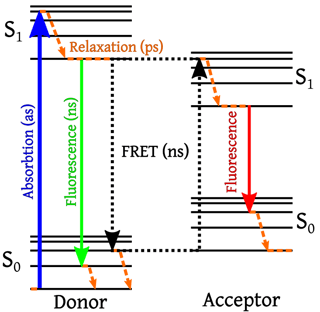 What Are Some Applications of FRET?

As FRET signal can only be generated when the fluorophores are less than 10nm apart, FRET provides information on the interacting proteins at a much higher spacial resolution than fluorescence imaging (typically around 200nm), and is thus ideal for determining whether the proteins are physically interacting (rather than simply co-localizing).

In addition, several types of biosensors have been developed that use FRET to measure various cellular processes. For instance, a calcium indicator called Cameleon is constructed by sandwiching calmodulin and the calcium calmodulin-binding domain of myosin light chain kinase (M13) between enhanced cyan and yellow fluorescent proteins (eCFP & YFP). Increase in intracellular calcium concentration triggers the binding of M13 to calmodulin to produce FRET between eCFP and YFP. Biosensors built on similar principle have also been developed for measuring pH, phosphorylation, and protease activity.

What Are Some Factors That Can Affect FRET?

FRET signals can be affected by the following factors:

If the donor and acceptor exhibit significantly different brightness levels, dual fluorophore imaging may result in one channel that is saturated while the other is dominated by systematic noise as most instruments can measure only a limited dynamic range. Therefore, it is best to use a donor and acceptor that are of comparable brightness.

If the donor-to-acceptor stoichiometry is outside the range of 1:10, the FRET signal may be masked by the background of fluorescent labels that are not undergoing FRET.

As a result, it is critical to first understand the expression level of your interacting proteins prior to doing a FRET experiment using native tissues or cultured neurons.

Spectral cross-talk refers to the cross excitation between spectrally overlapping fluorophores, which can affect the validity of the FRET signal.

As some degree of spectral overlap between the donor and acceptor is necessary for FRET, spectral cross-talk will inevitably occur for any FRET pair, and must be addressed when FRET is measured (more on this in the next article).

False negative FRET signal can occur when the proteins are indeed physically interacting, but the fluorophores are not properly aligned and thus are more than 10nm apart. Therefore, it is particularly important to ensure that the fluorophore-tagged antibodies do not bind epitopes that are at the far end of each protein.

How Does FRET Compare to BRET and PLA?

The advantage of FRET over BRET is that it can be performed in native tissues using appropriate antibodies, without the need to modify the interacting proteins by fusing them with fluorophores.

When compared to PLA, FRET is a cheaper option that can be equally informative as PLA probes are much more expensive than fluorophore-tagged secondary antibodies. Although the ability to amplify the signal in PLA allows it to be a quantitative measure while FRET can only be qualitative.

In addition, although both FRET and PLA are based on the use of antibodies, FRET has the advantage of showing the protein interaction within 10nm, whereas PLA can be generated when the proteins are 30nm apart, meaning that they may not be physically interacting and are simply in close proximity.

Is there anything I can help clarify regarding FRET? Let me know in the comment section below.

In the next article, I will discuss different FRET analysis techniques being used to study protein interactions.

In the meantime, if you're planning a FRET experiment, why not try out BenchSci and examine published FRET data to help you find the most suitable antibodies for your study?