Western Blot Fail: 3 (Painful) Lessons I Learned as a Non-Scientist About Sources of Error in Biomedical Experiments

That's not what you want to hear doing your first Western blot. I wasn't even halfway through. I separated proteins with gel electrophoresis and now had to transfer them to membrane. Only then could I block and apply antibodies.

And applying antibodies was the goal. Because unlike many people at BenchSci, I'm not a scientist. I consider myself scientific—I even studied the history and philosophy of science and technology. But at BenchSci, where I head growth, the only experiments I run are A/B marketing tests. So, to better understand how our antibody search platform helps scientists, I needed to feel their pain first-hand.

And man, did I. "Looks like this gel is expired," said the lab technician, peeling off the membrane. "Nothing transferred." After half a day in the lab, I failed my first Western blot spectacularly—I never even got to apply antibodies. It was a serious disappointment, but reinforced three insights I had into why anything that reduces sources of error in biomedical experiments would be welcome.

Insight 1: A Lot Rides on a Single Experiment 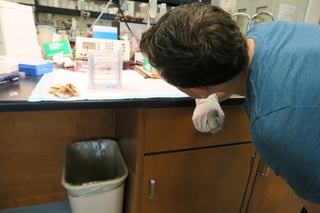 I was fortunate. For my experiment, I used prepared samples. I did nothing to prepare them. Normally, I learned, it could take weeks or months to get to this stage, depending on whether the samples had come from animals or cell lines. So while I lost a morning, I could have lost months. Antibodies and other reagents bridge the last mile of a long journey. It sucks to come all that way and drive off a cliff.

Insight 2: Many Points of Failure in a Very Manual Process

I learned from the lab technician that the technology we used for our Western blot—basically a box like a battery (electrophoresis chamber), plastic cases, sponges—was old school, and that more automated systems exist. But while they're more efficient with antibodies, they're also expensive. So old, cheap technology prevails—especially in academic institutions.

And man is it error-prone! We had to overcome leakage from loose parts, for example, which we did using the precise scientific technique of banging the box or practically sitting on it. Once we tightened things up, I was surprised at how manual the process was, providing even more points of failure. I made a mistake while pipetting, for example, dispensing too little sample into a well. This small error had a long-term impact, as now the protein target would seem less dense on film regardless of its presence in the sample. So I'm not surprised about the reproducibility crisis.

Insight 3: Scientists Will Do Anything to Remove Sources of Error

When we started our experiment, my colleague Maurice pointed to initials that scientists had written on the equipment. "People put their name on things," he said, "because if they have success using a piece of equipment, they want to use that equipment again in future."

I laughed, because it made scientists seem as superstitious as athletes. But after experiencing leakage and messing up my sample volume, I understood: there are so many things scientists can't control, they're constantly looking for things they can.

And that's why, despite not even making a successful transfer, I consider my experiment a success. My hypothesis was that BenchSci's ability to reduce reagents as a source of error is important for scientists. Experiencing the frustration of a blank membrane, after a morning dealing with fussy equipment and poor pipetting, I can only conclude my hypothesis is correct.

From the Bench to Business: 5 Things I've Learned So Far
Lessons Learned from Interviewing More Than 500 Software Engineers Over the Last Three Years
Empowering Scientists: Why I Work at BenchSci