Culture Eats Everything for Lunch

This week I had the pleasure of sharing more about BenchSci’s unique culture at Collision hosted in  Toronto. I’ve often written about our culture here and on Medium, and have had likely hundreds of conversations about it with VCs and advisors, but this was the first time I talked about it from a stage to an in-person audience of hundreds of people. I was very grateful to have been able to share one of BenchSci’s greatest accomplishments so far from the city where our company was founded in 2015.

I also realized that despite all the routine conversations and documentation of our culture, we are in the midst of hypergrowth. Seventy percent of our team have been at BenchSci for less than a year. That means it is more important than ever to explain and document how we view and nurture our culture for many people who are hearing about it for the second time, third time, or even fourth time. Repetition doesn’t just help us learn and remember, it gives us a chance to revisit and make sure our culture is still working. You’ll see me discuss some of that in my presentation below.

I am a fan of Peter Drucker, especially his famous saying, “Culture eats strategy for breakfast.” It is 100% true. I learned this lesson first-hand only six months after we raised our Series A round. In 2018, we raised $27M dollars. We achieved our product-market fit and it was now the time to achieve business model fit. That business model was a marketplace. Tier 1 VCs invested $27M in this marketplace idea, and a few months after our A round we launched our marketplace and sold our first product. We were so excited that we popped a few bottles of champagne at the office. What we did not know at that time was that would be the last product we sold on the marketplace. 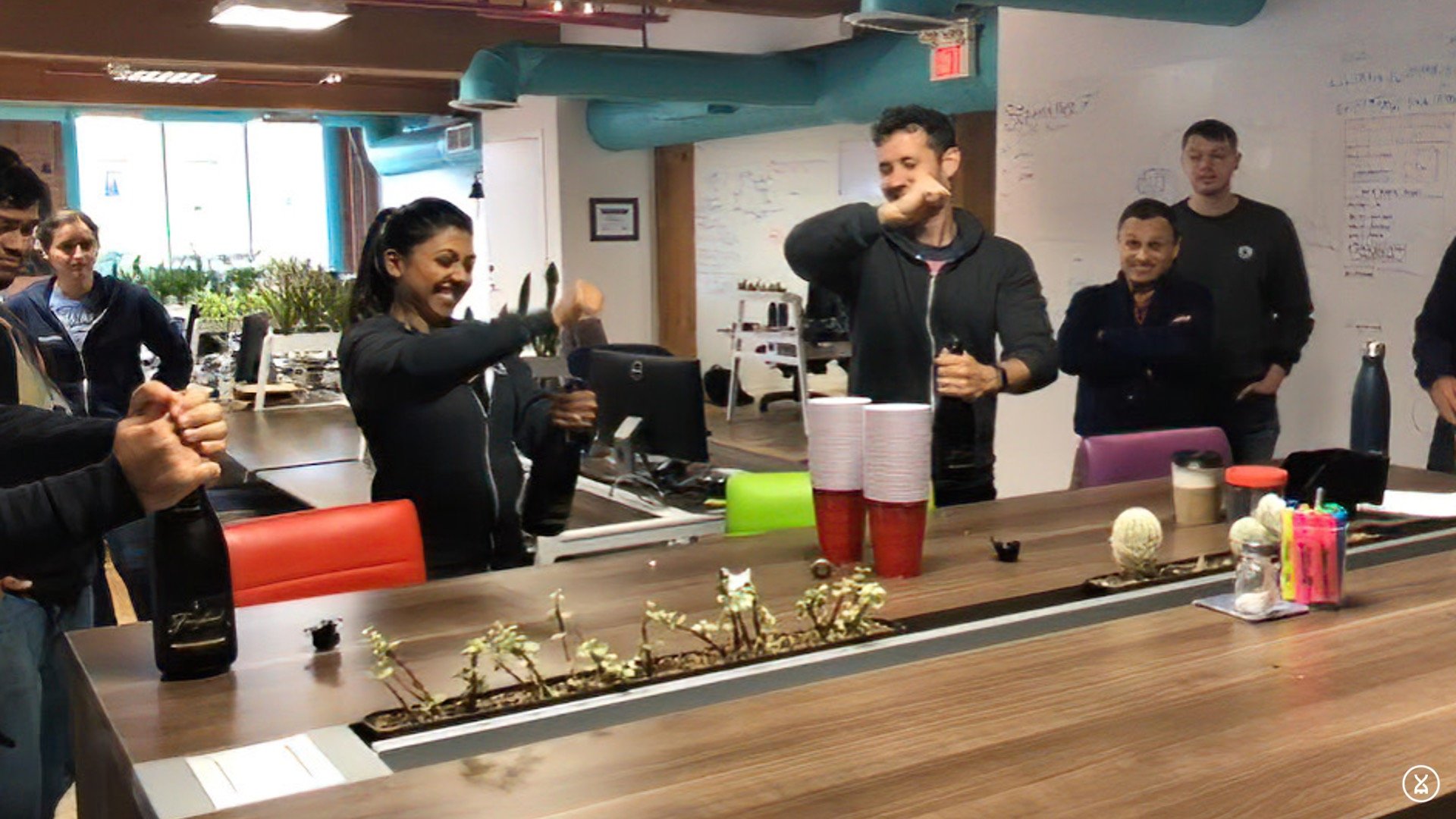 While our users loved our product it was clear that our marketplace business model was not adding the right amount of value for them. Within three months it was clear to us that this is not working out and I was petrified. I had raised $27M to make this happen and, after three months, it had failed. The strategy was wrong. So I did what every CEO would have done, I called a board meeting.

I went to our board and presented our findings, declared the marketplace a failure, and suggested a new path forward: a SaaS business model. I thought the board would be furious with us. To my surprise, they were quite happy and supportive. When I asked them why they were so happy when we had failed so badly, they told me: “We’re happy because you realized it didn’t work after three months and a few hundred thousand dollars and not three years and $27M.” Then they told me to get the team back to work.

I was so inspired by that moment because it was proof of our culture in action. Especially one of our core leadership principles, which is “strong convictions, loosely held.” Our team believed strongly in what we were doing but we were willing to change business models quickly when we realized it wasn’t working. That attitude saved our company. So Peter Drucker was right, culture did eat our strategy for breakfast. 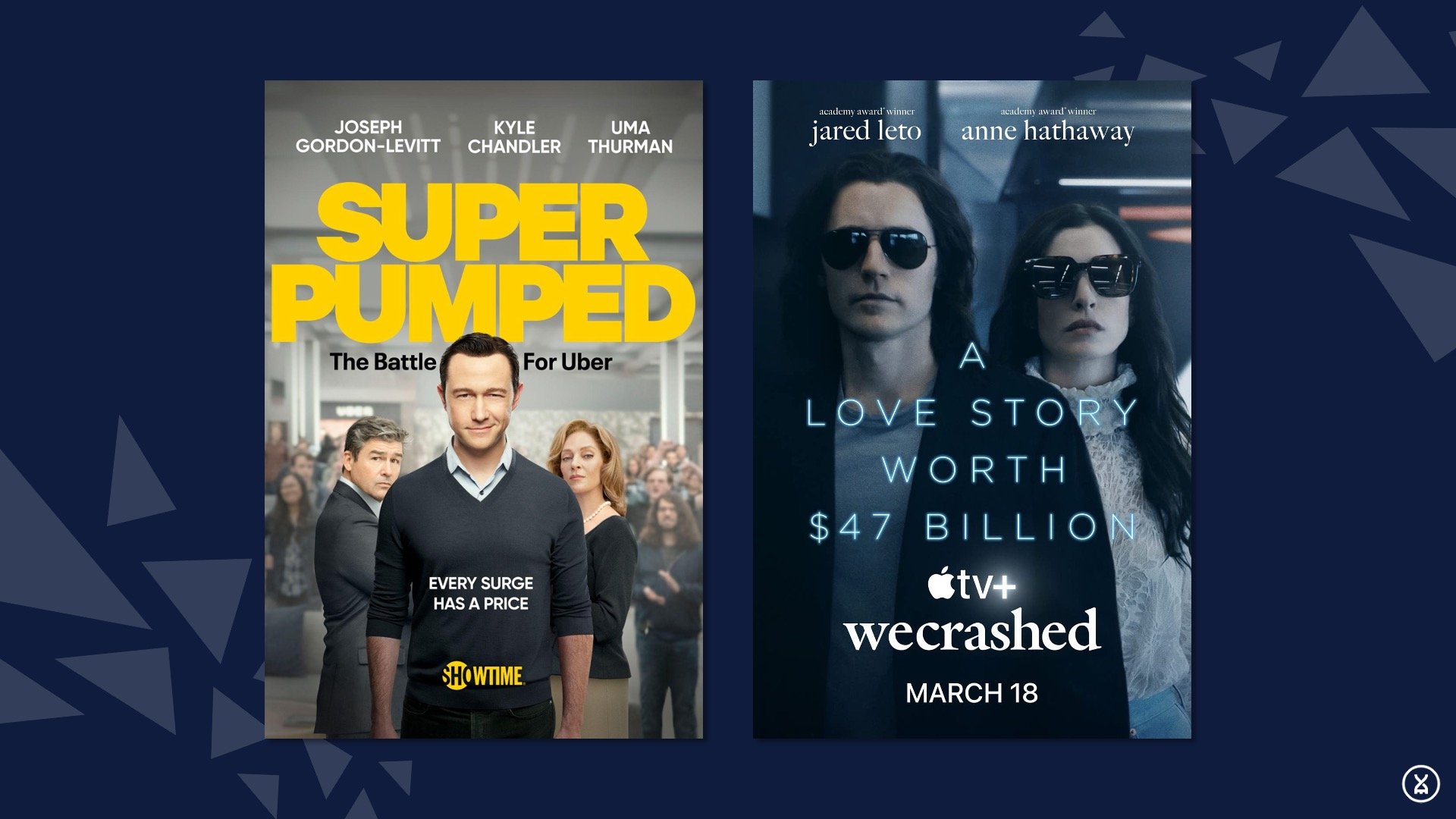 Uber and WeWork both had a great start and the right strategy. They achieved immense financial success and made a lot of impact on the market. And still, they failed. They lost over $60B in market cap and even became the subject of primetime docudramas. That all happened for one reason: their toxic culture. Regardless of product and their market share, the decisions made within the companies led directly to the circumstances they ended up in. All decisions are rooted in culture. In the end, culture ate these companies’ revenue and market cap, not only their strategy. 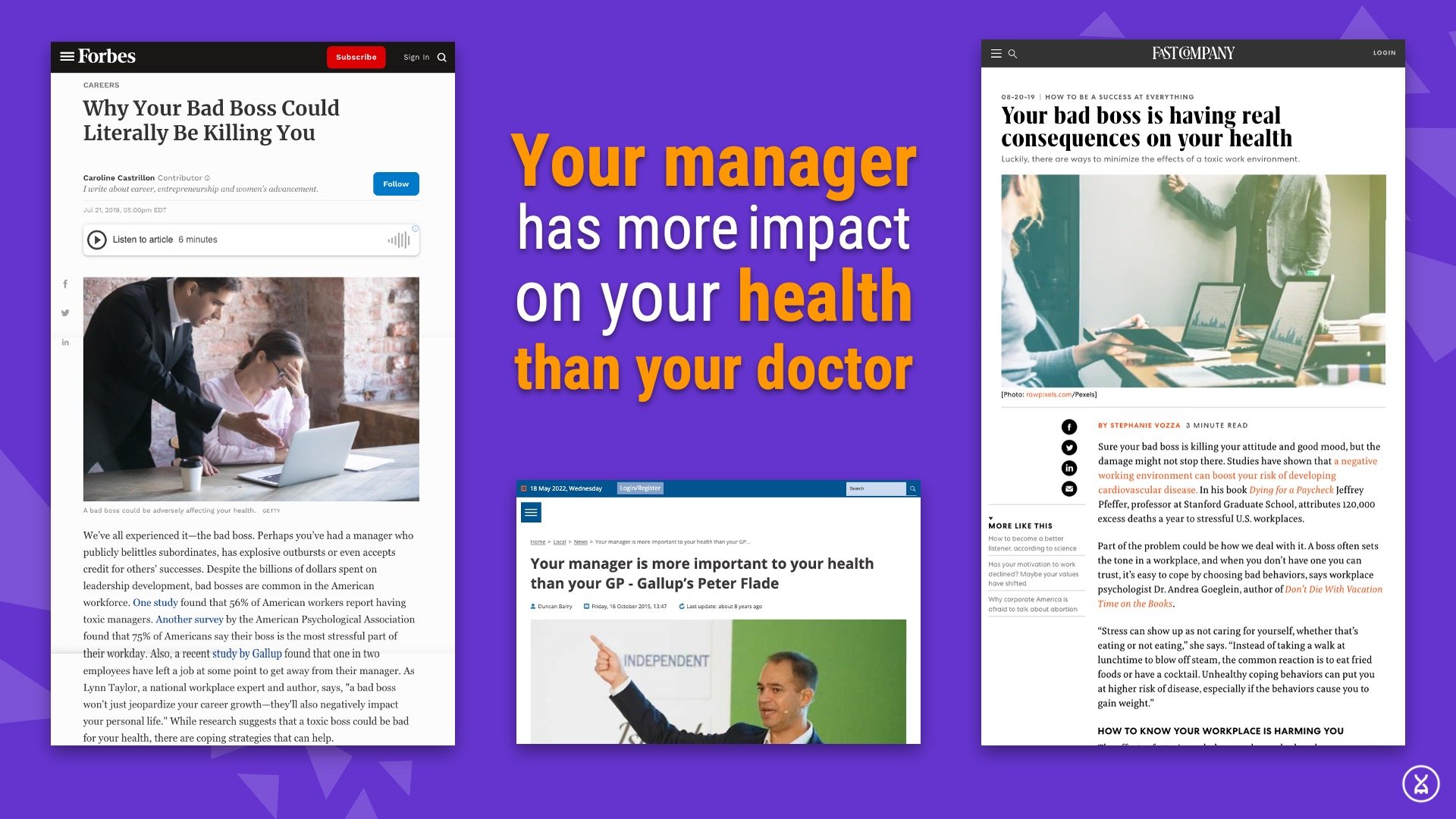 We all know that leadership is an extremely important and a huge part of culture (as mentioned above). Did you know that research shows that a bad manager has more impact on an employee's health than their own doctor?

In fact, 55% of employees who work in an unjust work environment are more likely to be diagnosed with a major disease. A study from Sweden found those who report to a toxic boss were 60% more likely to suffer from a heart attack or stroke. I haven’t found a business yet that can be successful without healthy employees.

When Basecamp tried to ban any talk of politics at work. They sent out a company-wide email announcing that politics, social justice issues, and world problems would not be discussed in the workplace anymore. Nearly a third of their team resigned. A culture that does not acknowledge its team members are human and ignores their lived experiences is not an inclusive culture. Culture ate their employee retention.

How to build a healthy culture

At BenchSci, we have been obsessing over culture for years now. We like to think about our culture as a four-legged stool that includes:

The first thing we did to build our culture in alignment with this framework was to codify it, which is a fancy way of saying, we wrote it down. We spoke to our team, did some soul searching, looked at companies we admired and didn’t admire, then finally came up with our four pillars above.

The second thing we did was operationalize it. Writing your values on your wall is not enough. It has to be a part of how you hire, promote, partways, hold meetings, make decisions, and more. It has to be integrated into all of your policies and you need to create rituals and symbols around it. This creates shared meaning and methods of communication for our team so they are all on the same page when it comes to understanding and talking about culture.

Finally, and most importantly, is to understand that culture requires constant maintenance just like a house. At BenchSci, we make sure to repair that house every single year so we never have to tear it down. It might need new paint, plumbing, a new wall, or more. As long as you take care of it every year you will never have to get to a place where you need to gut it and completely transform it.

What I love most about culture, is that it scales. It is probably the only thing that scales without slowing your company down and adding bureaucracy. If you get the culture right from the beginning with your core team members it will propel your business forward. 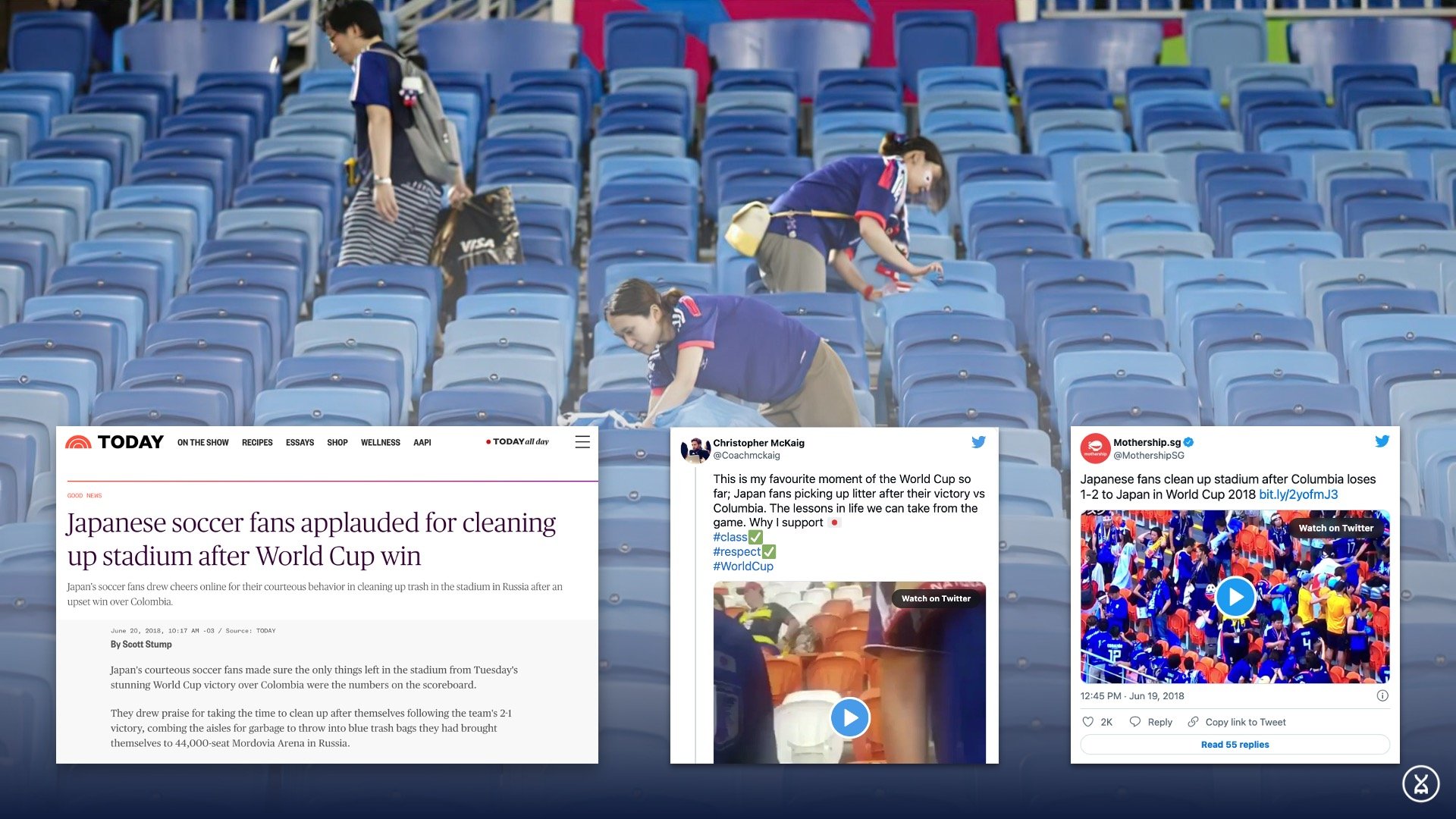 This is a picture of the 2018 World cup tournament. After a 2–1 win over Columbia, Japanese fans stayed for hours to clean their area in the stadium. They didn’t clean because they had to or someone told them to. They did it because they believed it was the RIGHT thing to do. They did it because it is their culture. 126 million people live in Japan. And if they can scale their culture to over 100M people, each of us can do that for a few hundred or thousands of employees.

That’s why I encourage everyone to integrate culture into your definition of success. Not only because it eats everything for breakfast, lunch, and dinner but also because it is the right thing to do. Culture is how we do things and how we do things matters as much as what we accomplish.

So, what is culture eating at your company and what are you going to do about it? Share your thoughts in the comments below. And if you're feeling inspired to join us, learn more about careers at BenchSci.