Tiago Oliveira on Antibodies for Understanding Cancer Biology Through Glycoproteomics 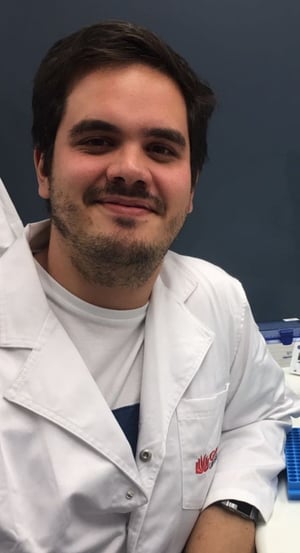 Tiago Oliveira completed his undergraduate and master’s degrees in Portugal, at the University of Porto and the University of Minho, respectively. During his master’s thesis, Oliveira developed a passion for glycoproteomics, the study of glycosylated proteins, specifically its role in cancer biology. Combined with his desire to study abroad, he is currently pursuing his PhD in Australia at the Institute for Glycomics at Griffith University, in the lab of A/Prof. Daniel Kolarich. Outside of the lab, Oliveira loves playing guitar and is an avid concert-goer.

Current Research: Elucidating the Role of the Glycocalyx in Cancer Biology

Glycosylation is one of the most common post-translational modifications that can occur to a protein. Glycoproteins and glycolipids surrounding a cell form a pericellular matrix on the cell surface, known as the glycocalyx. This glycocalyx influences how the cell interacts with its surrounding cells. “The glycocalyx profile of a cell is a unique identifier that can be used to determine healthy versus diseased cells,” says Oliveira. Tumour cells have a glycocalyx profile that facilitates their detachment from the epithelia, allowing them to migrate to nearby tissues and cause metastasis. “In gastric cancer specifically, we found that the N-glycans on E-cadherin regulate its tumour suppressive functions,” Oliveira adds, referring to his most recent finding published in Oncotarget.

Since joining A/Prof. Kolarich’s lab, Oliveira started employing glycoanalytical mass spectrometry to understand the glyco-languages that all cells use to communicate to exploit this knowledge for cancer diagnosis, treatment, and prevention.

The Challenge of Finding Antibodies for Glycoproteomic Studies

Glycoprotein-focussed mass spectrometry relies on the ability to first immunoprecipite the glycoprotein of interest, and then using mass spectrometry to analyze its glycan profile. This allows you to profile multiple glycans on a glycoprotein at once, as opposed to individually as in western blot analysis. “I specifically look for antibodies that do not target glycosylation to enrich the protein sample to be run in the subsequent mass spec analysis,” says Oliveira.

To do this, Oliveira spends a considerable amount of time finding as much data as he can for his antibody search. “I look through the available antibodies on multiple vendor websites to see if the immunogen sequence is available,” says Oliveira. “Unfortunately, such data is often missing, and then I have to search through the literature to find cases where antibodies were used in glycoanalysis.” Given the research community’s growing interest in glycoproteomics, and accordingly, the number of associated publications, finding the data he needs has become increasingly difficult.

“You guys are doing very tough work. That’s why I love the tool, because I can’t imagine how much work you guys have put into it.”

Data Is Key, and BenchSci Has It

Knowing the critical role that immunogen sequence plays in an antibody search, BenchSci actively collects such data from antibody vendors to help scientists like Oliveira. BenchSci even goes a step further and analyzes predicted cross-reactivity for antibodies with immunogen sequence available (>400K of them).

When asked about what he found the most useful on BenchSci, Oliveira responds: “The various types of data on BenchSci. It’s not only great to be able to review published data by specific contexts, but the vendor and independent data are also very useful, because it helps me identify and evaluate all the options available to me.”

To make sure scientists can find antibodies that are commercially available to them, one of the key objectives at BenchSci is to continuously expand its database. Currently at over 5 million antibodies from 197 vendors, BenchSci is the largest antibody database in the world.

“You guys are doing very tough work”, Oliveira adds. “That’s why I love the tool, because I can’t imagine how much work you guys have put into it.”

New Feature: Select Figures to Compare Side-by-Side, and Easily Organize Them in Saved Lists
PCR Primers and Probes Are Now on BenchSci
How BenchSci Helps Scientists Overcome the Challenges of Working with CRISPR