Antibodies remain the backbone of molecular biology research with tens of thousands available commercially for a wide range of proteins. However, a vast majority of these antibodies are geared toward human or relevant mammalian models. This leaves a dearth of antibody support for other widely used non-mammalian model organisms.

These model organisms range in biological diversity from single cellular eukaryotes, such as yeast, to more complex life forms such as fruit flies or zebrafish. Despite their early divergence from humans, research with these model organisms has greatly contributed to our understanding of basic cellular biology and human disease. For instance, past and ongoing studies of Saccharomyces Cerevisiae, or baker’s yeast, significantly advanced our understanding of basic cellular biology. These advancements include mechanisms involving aging, mitochondrial dynamics, oxidative phosphorylation, homologous recombination, and RNA splicing.

More complex model organisms such as Drosophila melanogaster (fruit fly) yielded studies of equal magnitude in the fields of genetics, embryogenesis, and neurodegenerative diseases. For instance, much of the mechanistic studies of Pink1 (PTEN-induced kinase 1) and E3 ubiquitin ligase Parkin, a pathway of autosomal recessive Parkinson’s disease, were done in Drosophila. These examples show how basic research has a remarkable contribution to our understanding of human health and disease. Unfortunately, commercially available antibodies for non-mammalian model organisms are vastly underrepresented in the market.

Lack of Antibodies Due to Shortage of Research Funding

Though there are alternatives to detecting proteins without commercially available antibodies, a lack of antibody support for a model organism can greatly hinder research progress, particularly when studying mechanisms of cellular biology. One possible reason for this disparity is there is little demand for non-mammalian antibodies relative to antibodies for mammalian models. This is reflected in the relative amount of research and funding for the various model organisms. A study on publication trends in model organism research show that rat and mouse mammalian models have dominated publication output over other non-mammalian models (Figure 1). NIH research funding shows a similar trend. 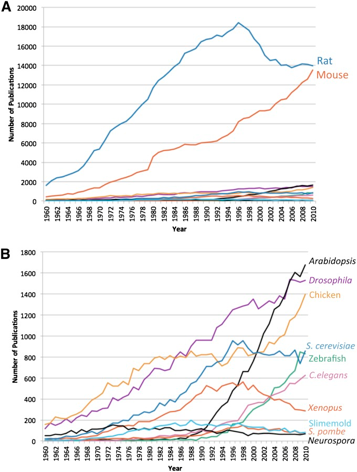 Furthermore, many of the antibodies available commercially for non-mammalian organisms are typically from highly conserved and well-studied pathways (i.e. metabolic or signal transduction pathways). These proteins are ubiquitous in research and makeup much of the antibody support for non-mammalian models simply as a consequence of cross-reactivity. Unfortunately, this puts model organisms that are highly divergent, such as the invertebrate C. elegans, at a disadvantage because many of their orthologs will not react with most commercial antibodies.

What Can You Do?

So how does a researcher study a particular protein without any commercially available antibodies for it? Here are a number of alternatives the research community actively employs to study proteins without commercial antibodies.

For research fields studying very specific cellular systems, researchers typically rely on a tight knit community for sharing antibody serum. These polyclonal antibodies are usually made in-house by individual labs and are (ideally) freely shared within the scientific community. Unfortunately, the serum has a finite quantity and may have issues with specificity depending on several factors (i.e. purity of the serum or antigen, immunogenicity of the protein, degree of homology to similar proteins). To help satisfy the need for limitless and reliable antibodies, there are a number of hybridoma banks that specialize in providing monoclonal antibodies for a price. One such bank is the Developmental Studies Hybridoma Bank.

If you don’t have an antibody for a given protein, a simple solution is to tag the protein with an epitope that can be detected by an available antibody or other detection methods. These tags are encoded into the gene of interest and can range from small epitope peptides (i.e. Flag, Myc, HA) to entire proteins (i.e. GFP, GST, HRP). A review of affinity tags for proteins can be found here. Protein tags can be done either endogenously through integration into the genome or exogenously via plasmid. For instance, in yeast there are several available cassettes for endogenous tagging of genes with selection of an auxotrophic marker. After selection, the tagged gene is usually stable and does not require further maintenance with selection media.

Human cell lines can also be tagged endogenously. One method would be co-transfection of the gene of interest and a recombinase that can allow steady integration into the genome. For exogenous expression in yeast the gene can be knocked out (assuming it’s not essential), followed by a rescue with the tagged protein expressed using a plasmid. From there the plasmid would have to be maintained in selection media. For human cell lines the plasmid transfection is usually transient, lasting only a few days and would have a reporter gene such as GFP to confirm expression.

As mentioned previously, many of the antibodies available for non-mammalian model organisms are for highly conserved proteins that cross react with their mammalian homologs. In theory, an antibody against a protein from a given organism could work for a homologous protein of another organism provided that the proteins are similar enough. This depends on the degree of homology between the two proteins and whether the antibody can recognize a common epitope. However, determining what antibodies cross-react with a given species can be tedious and time consuming. Fortunately, BenchSci is working on a technology to help predict the level of cross-reactivity of available antibodies across species. Stay tuned for the cross-reactivity feature planned for March, 2018!