Breast cancer is the most common cancer type in women worldwide. It is estimated that 70% of patients with breast cancer are estrogen receptor (ER)-positive, making hormonal therapies using ER antagonists and degraders, such as tamoxifen and fulvestrant, common treatments for breast cancer. However, therapies with ER-independent mechanisms are needed as approximately 30% of breast cancer patients are ER-negative, and a subset of patients undergoing hormonal therapies develop treatment resistance. In this article, our blog contributor Bassem Toeama, MD., will discuss the recent advances in the treatment of stage IV metastatic breast cancer, particularly the role of anti-Epidermal Growth Factor Receptor 2 (HER2) monoclonal antibodies, Tyrosine Kinase Inhibitors (TKIs), and Antibody-Drug Conjugates (ADCs). 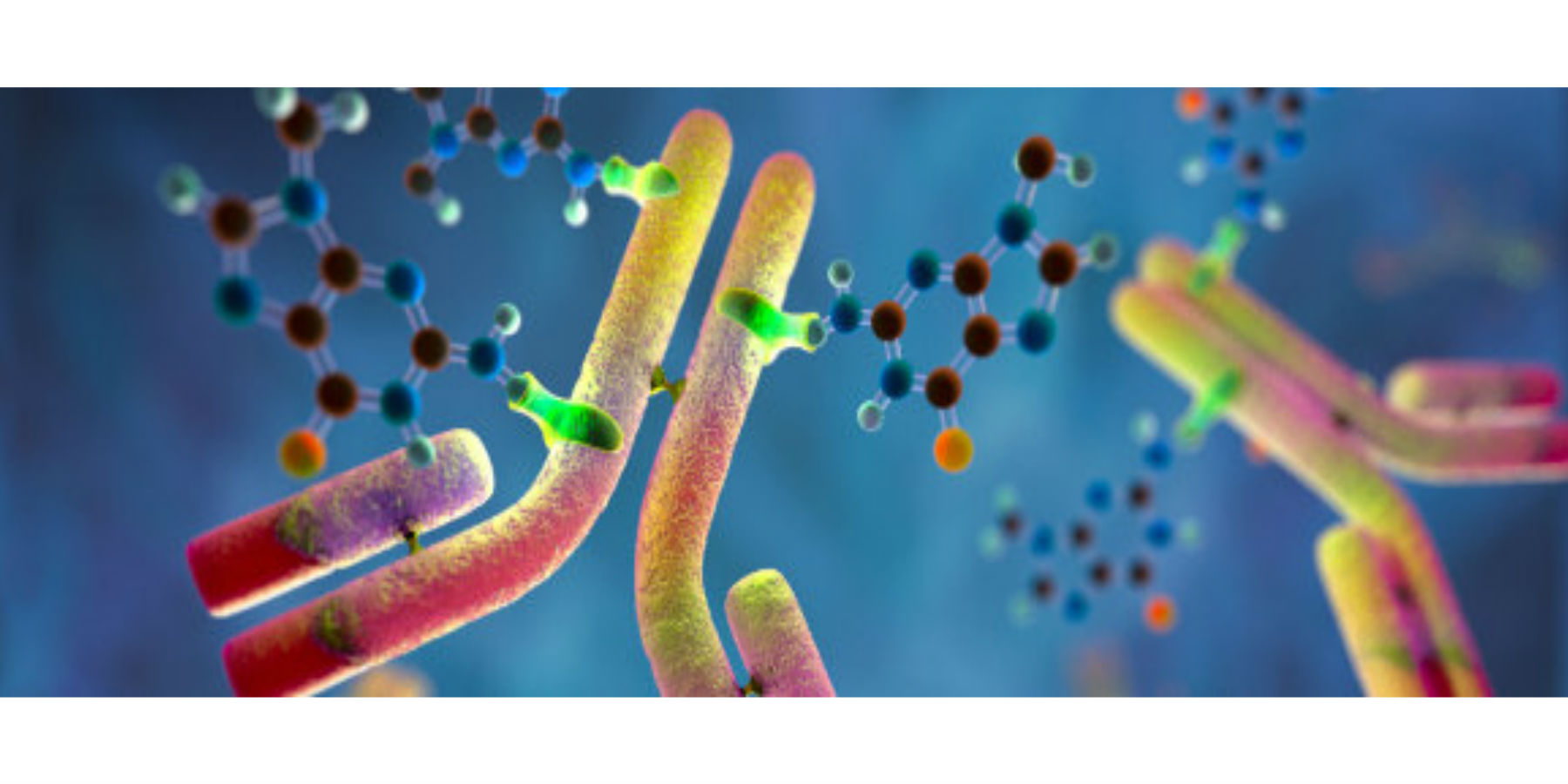 What Are Anti-HER2 mABs, TKIs, and ADCs?

HER2, also known as ERBB-2, is a 185-kDa member of the erbB  family of protein kinase receptors. It consists of an extracellular ligand-binding domain, a transmembrane domain, and an intracellular tyrosine kinase domain. Binding with the epidermal growth factor like ligands (EGF-like ligands) including the 133-kDa Epidermal Growth Factor (EGF) polypeptide, the 17-kDa transforming growth factor alpha (TGF-α) polypeptide, the 20-22 kDa Heparin binding-EGF like growth factor (HB-EGF) polypeptide, the 43-kDa Amphiregulin (AR) polypeptide, the 32-kDa Betacellulin (BTC) polypeptide, the 5-kDa Epiregulin (EPR), the 7.9 kDa Epigen monomeric polypeptide, the 28-36 kDa Cripto polypeptide, the 44-kDa Neuregulin 1 (NRG1) glycoprotein, the 32-kDa Neuregulin 2 (NRG2) polypeptide, the 75-kDa Neuregulin 3 (NRG3) polypeptide, and the 66-kDa Neuregulin 4 (NRG4) polypeptide, induce formation of HER1-HER2, HER2-HER3, and HER2-HER4 heterodimers and activate downstream signal transduction cascades as the MAPK, Akt, JNK, and JAK2/STAT3 pathways leading to cellular differentiation, mobility, proliferation, and survival. Surprisingly enough, the ligand binding and signaling potency of HER2 heterodimers are much higher compared to other non-HER2 heterodimers and homodimers. The reasons for that are the slower rates of ligand dissociation, ligand-induced endocytosis, and receptor internalization. Analysis of the human tissue-specific expression by genome-wide integration of transcriptomics and antibody-based proteomics has shown that the HER2 gene (Ensembl Gene ID: ENSDARG00000038205) is widely expressed in the breast tissue with 18.80 RPKM/FPKM unit of transcript expression. Somatic mutations of the HER2 gene lead to overexpression and constant activation of HER2, uncontrolled cell division, and carcinogenesis. The comprehensive molecular profiling by Cancer Genome Atlas Research Network has shown that several cancers are associated with HER2 overexpression including 25-30% of breast cancer invasive ductal carcinoma subtype.

Anti-HER2 mABs are large antibodies with monovalent affinity produced by recombinant DNA technology. The mechanism of action of anti-HER2 mABs is blocking the extracellular ligand-binding domain of HER2 thus attenuating the neoplastic actions of HER2 heterodimers. In addition, the anti-HER2 mAB-HER2 complex is internalized and destroyed by the target cell, thus reducing the number of available HER2 receptors for recycling back to the cell membrane. TKIs are relatively smaller molecules compared with the Anti-HER mABs. The mechanism of action of TKIs is inhibiting phosphorylation of the intracellular tyrosine kinase domain of HER2. Immunoconjugates, often known as antibody-drug conjugates (ADCs), represent a different class of therapeutic antibodies. They are anti-HER2 monoclonal antibodies conjugated (joined) to chemotherapeutic drugs. The mechanism of action of the anti-HER2 mAB-chemotherapeutic drug conjugate is intracellular cytotoxicity following internalization of the the ADC-HER2 complex. It was clear that anti-HER2 mABs, TKIs, and ADCs could have a significant role in the treatment of breast cancer. Translational research became a necessity to translate hypotheses into evidence-based medicine.

The Role of Translational Research in the Drug Development Process of Anti-HER2 mABs, TKIs, and ADCs for Stage IV Metastatic Breast Cancer

“Proof of mechanism” studies are preclinical drug development studies. They are conducted in the research laboratory to accept or reject a hypothesis that a drug candidate, through its interaction with its molecular target (receptor or enzyme), will affect the signalling cascade, interfere with the molecular pathway, and intentionally alter the biology of the target cells.

The corresponding landmark “proof of mechanism” studies in the drug development process of anti-HER2 mABs, TKIs, and ADCs for stage IV metastatic breast cancer include:

“Proof of concept” studies “also known as phase I and phase II studies” are early stage clinical drug development studies. They are conducted on a small scale of human subjects to show the effect of the investigational medicinal product (IMP) on the disease and find the recommended dose for “proof of principle” and “proof of efficacy” studies.

The corresponding landmark “proof of concept” studies in the drug development process of anti-HER2 mABs, TKIs, and ADCs for stage IV metastatic breast cancer include:

“Proof of principle” studies are early stage clinical drug development studies. They are conducted on a small scale of human subjects between Phase I and Phase II studies to evaluate the effect of the IMP on disease biomarkers (prognostic, predictive, efficacy, safety, surrogate).

The corresponding landmark “proof of principle” studies in the drug development process of anti-HER2 mABs, TKIs, and ADCs for stage IV metastatic breast cancer include:

“Proof of efficacy” studies, also known as “Phase III studies,” are late stage clinical drug development studies. They are conducted on a large scale of human subjects to evaluate the effect of the IMP on the primary and secondary clinical endpoints.

The corresponding landmark “proof of efficacy” studies in the drug development process of anti-HER2 mABs, TKIs, and ADCs for stage IV metastatic breast cancer include:

Survival statistics of stage IV metastatic breast cancer have favourably evolved in the past few years. This is mostly due to the recent advances in breast cancer targeted therapy and the significant role of anti-HER2 mABs, TKIs, and ADCs. Examples of anti-HER2 mABs, TKIs, and ADCs that were developed in the past few years and have proven efficacy in treatment of stage IV metastatic breast cancer include trastuzumab, pertuzumab, lapatinib, and trastuzumab emtansine. Based on data collected from the National Cancer Institute (NCI) Surveillance, Epidemiology and End Results program (SEER), the relative 5 years survival rate for cases of stage IV metastatic breast has increased progressively from 22% to 27% in the last 15 years. The interplay between basic laboratory research and applied clinical research caused a paradigm shift in the natural history of many malignant diseases, including breast cancer, giving hope for a better tomorrow.

Editor's note: If you are studying any of the biomarkers mentioned in this article, we put together a list of antibodies with the most published figures on BenchSci for you to review.