Innate lymphoid cells (ILCs) are the most recently identified population of immune cells that belong to the lymphoid lineage. They represent a distinct arm of the innate immune system that can directly communicate with a wide variety of haematopoietic and non-haematopoietic cells to mediate host defence, inflammation and metabolic homeostasis in multiple tissues. ILCs are characterized by classic lymphoid cell morphology. However, unlike adaptive T and B lymphocytes, they lack pattern-recognition receptors and somatically rearranged antigen receptors and therefore cannot respond to pathogenic insult in an antigen-specific manner. They are ubiquitously distributed throughout the body and enriched at mucosal and barrier surfaces, serving as the first line of defense against microorganisms. 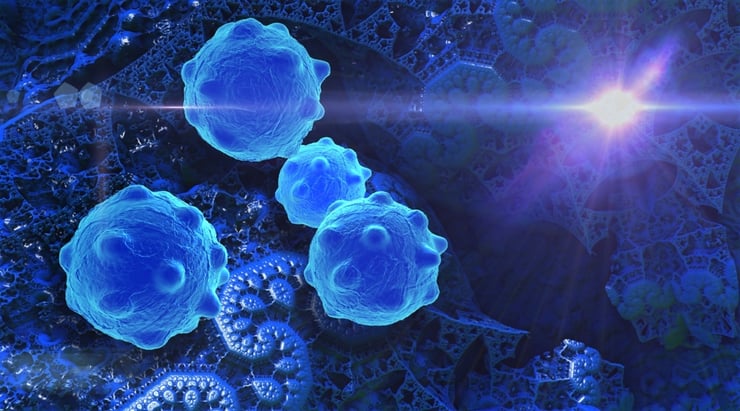 For the past three decades, natural killer (NK) cells were the only known ILCs. However, in recent years, significant progress has been made in identifying new populations and understanding the complexity of the growing family of ILCs. ILC populations are categorized into three groups based on the differential expression of cell surface markers, transcription factors that direct their function, and the cytokines they produce:

In humans, ILC subsets have been studied in different tissues, such as blood, gut, skin, lungs, etc. In the July 2014 issue of Blood, Hazenberg and Spits sought a gating strategy for the detection of ILCs in human blood. ILCs were characterized as negative for the expression of specific lineage markers, which include markers for T cells (TCRab and TCRgd), B cells (CD19), NK cells (CD94), myeloid and plasmacytoid dendritic cells (CD1a, CD11c, CD123, and BDCA2), monocytes and macropahages (CD14), mast cells (FCeR1), and stem cells (CD34), but express CD45, CD127 and CD161.

Within the ILC population, specific surface markers have been used to identify distinct ILC subsets. The ILCs are further gated on CD117 (c-kit) and CRTH2. In fact CRTH2 is the only surface marker that uniquely identified human ILC2s. The CRTH2- (ILC1 or ILC3) cells were gated on c-kit and NKp44. Both ILC3 subsets, NCR+ ILC3 and NCR- ILC3, were gated as c-kit+ and NKp44, which is a natural cytotoxic receptor made a further distinction. The c-kit-, NKp44- cells represented ILC1s. Since NK cells could contaminate the ILC1 subset, CD56 marker is used to exclude NK cells.

Although ILCs are found in many organs throughout the human body, the composition of ILC subsets varies considerably among tissues. For instance, the ILC ratios in peripheral blood, skin, tonsil, lungs, intestine, and mesenteric lymph nodes revealed ILC3s as the predominant population, while CD127+ ILC1s were present only at a low frequency. However, the composition of ILCs might be altered in diseased tissues by the recruitment of ILC subsets from the periphery.

ILCs have been shown to be key players in several aspects of the immune response. Following pathogen invasion and tissue damage, epithelial cells and myeloid cells produce cytokines and alarmins that mobilize the rapid recruitment of ILC subsets. While ILC1s and ILC3s promote innate immunity to viruses, bacteria, parasites, and fungi, ILC2s were found to be essential for immunity against helminth parasites. ILCs (ILC2 and ILC3) also contribute to the diverse processes of tissue remodeling that promote tissue repair and homeostasis.

In addition, ILCs are known to promote inflammation at mucosal and barrier surfaces. For instance, ILC2s have been shown to be associated with susceptibility to atopic diseases such as allergy and allergic rhinitis. In fact, mouse studies demonstrate that ILC2s mediate responses in other atopic diseases, such as asthma, atopic dermatitis, chronic rhinosinusitis, and fibrosis.

While ILC2s are predominantly involved in allergic responses, ILC1s and ILC3s were reported to contribute to the development of inflammation in the intestine. Impaired number and function of ILC3s has been observed in patients with inflammatory bowel disease (such as Crohn’s disease). Similar to ILC2s, a role for ILC3s in psoriasis and fibrosis has also been suggested.

Evidence regarding the role for ILCs in cancer are emerging from studies investigating the pro-carcinogenic role of cytokines and chronic inflammation but further studies are required to understand the plasticity and function of ILCs within the tumour microenvironment.

The numbers and activity of ILCs is altered in many diseases but whether these changes correlate with symptoms and disease severity needs to be established.

Despite the remarkable functional similarity with T-helper-cell subsets in terms of cytokine expression and potential effector function, these ILC subsets perform their diverse functions in the absence of antigen specificity. Although present in relatively low numbers, the selective distribution of ILCs within tissues seems to confer a remarkable ability to regulate multiple physiological processes throughout the body. Finally, understanding the dysregulation of ILCs in the context of infectious, metabolic, and chronic inflammatory conditions in humans might provide therapeutic potential in the treatment of diverse diseases.

Editor's note: If you are studying any of the markers mentioned in this article for ILCs, we put together a list of antibodies with the most published figures on BenchSci for you to review.