A few months ago, I wanted to cut costs so my family could increase savings. My goal was to cut about one-fifth of our monthly spending. Pretty deep.

But how to do it? With two kids, we have many expenses. These include essentials like food, clothes, and video games to prevent boredom during pandemic lockdowns.

One option was to cut across the board. We could reduce every expense by one-fifth. Simple, right? But time-consuming and challenging. For example, some costs, like natural gas, are hard to negotiate. Others, like food, take significant work to find acceptable lower-cost alternatives. It's hard enough to find foods our kids will eat without this added criterium.

But there's another option, as illustrated in the chart below. As with most things in life, personal expenses follow the Pareto principle, also known as the 80/20 rule. I ran the analysis and, sure enough, about 26% of our expenses were responsible for 80% of our monthly spending. (Not exactly 80/20, as it often isn't. But pretty close.) In this group were things like our mortgage. Reducing such large costs by a small percentage would do more than reducing smaller ones by a larger percentage. And take less time! Accordingly, we renegotiated our mortgage, made a few other high-impact changes, and found the desired savings. 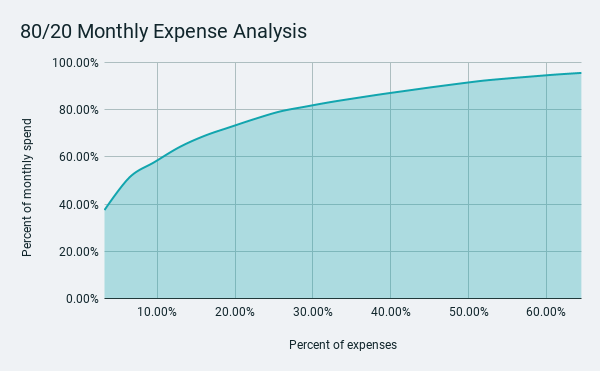 Now, you're probably asking: what in the world does this have to do with BenchSci, a fast-growing startup using machine learning to help scientists develop novel medicines faster?

The answer is that the 80/20 principle helps us stay focused , one of our core values, and put effort where it has the greatest impact.

While modern effectiveness gurus like Tim Ferriss have rediscovered and popularized the 80/20 principle, Italian polymath Vilfredo Pareto originated it in 1896 by documenting how 20% of Italy's population owned 80% of the land. Management consultant Joseph M. Juran applied the principle to quality control and named it after Pareto. (I have to imagine scientists or mathematicians had discovered the principle before Pareto, but he gets the credit and I can't find evidence of prior art.)

I learned about the power of 80/20 thinking after reading Ferriss's 4-Hour Workweek and then The 80/20 Principle by Richard Koch, who inspired Ferriss.

Koch took Pareto and Juran's idea and ran with it. He shows how, in multiple domains, a small number of inputs produce the majority of outputs. We humans seem wired to misinterpret the world as balanced (all inputs yield equivalent outputs) and linear (each new input yields equivalent output to the one prior). In fact, the world is imbalanced and nonlinear. A small number of inputs almost always account for most outputs, though the ratio isn't always 80/20. And additional inputs can have unpredictable results, sometimes diminishing outputs (such as when you add too many people to a team and incur coordination costs), or facilitating an exponential increase in outputs (such as when additional speed yields escape velocity).

You can find a wide range of examples of the 80/20 principle in every industry and area of life. In our own work, for  example, we see that a small percentage of scientific experiments contribute to the majority of progress in drug discovery. Some other examples include:

It even applies throughout your day-to-day life. As my colleague Nika Stelman pointed out to me, 80% of your daily outfits likely involve 20% of your clothes.

Focus on the most important inputs to maximize outputs

These aren't just interesting observations to feed philosophical conversations (though they are indeed that too). Rather, they have important real-world implications, such as:

A real-world example we're living through is COVID-19. One analysis finds that roughly 80% of COVID-19 deaths are amongst 20% of the population—such as people over 65 and those with chronic health conditions. Focusing interventions on this group, it argues, could yield better outcomes than treating everyone in the population equally.

At BenchSci, we apply such 80/20 thinking throughout our business. For example:

As an added bonus, applying this approach throughout our company has benefits beyond individual departments. As Koch notes, research shows that companies with less complexity are the most successful.

Applying such thinking at work also trains you to think this way in your personal life. And this can be quite helpful, such as when you're trying to cut expenses as I did several months ago.

Bonus: Run your own 80/20 analysis with this spreadsheet

To help you apply the Pareto principle to your life and work, I've created an 80/20 analysis template in Google Sheets. Simply enter your inputs and outputs, and see the 80/20 breakdown. In the spreadsheet, I've also included an example of my monthly expense analysis, with expense names and values sufficiently modified to preserve privacy, but still in their original ratios. I hope you find this all useful.

Thanks to Jeremy Seath, Mark Kostove, and Nika Stelman for their input to this article.

From the Bench to Business: 5 Things I've Learned So Far
Western Blot Fail: 3 (Painful) Lessons I Learned as a Non-Scientist About Sources of Error in Biomedical Experiments
Lessons Learned from Interviewing More Than 500 Software Engineers Over the Last Three Years