Entrepreneurship as an Alternative Career for PhDs in Life Sciences: Part 1

During the last year of my PhD study, I often found myself asking the same question: "What am I going to do after graduation?"

While there are many "typical" career options for life science PhD graduates, ranging from Faculty Positions to Industry Research Scientists to Medical Science Liaisons, I stumbled upon an unexpected career path: Entrepreneurship.

In this 2-part series, I would like to tell a story about how we (the BenchSci team) went from a bunch of grad students meeting in a cafeteria to running a venture-funded company (part 1), and to provide some tips and advices for those of you who are interested in exploring entrepreneurship as an alternative career for PhDs (part 2).

From Idea to Business

Our journey so far can be broken down into 4 stages, each marked by our advancement in getting venture funding.

The idea of BenchSci was born in summer 2015 when our Chief Scientist, Tom, struggled to find the best antibodies for his experiments. He tried to look for a database that aggregates published data for antibodies to support his purchasing decisions, but was surprised to find out such database does not exist. He decided that, since he was about to start looking for jobs, why not try and create a job for himself? Our journey begins.

Trained as a scientist, Tom did not have any business knowledge to run a company, nor did he have the technical capability to build the platform he envisioned. He first needed a team that shared his vision.

So how do you put together a team? For us it was LinkedIn and networking. Tom found his first cofounder by logging into LinkedIn and typed in, "University of Toronto," "PhD" and "Computer Science." He then cold-messaged the first profile that showed up, David Chen, and invited him to a coffee chat. David is now our Chief Technology Officer.

As for myself, I met Tom during our year together on the executive team at a student career development initiative. I resonated with Tom immediately when he told me about the idea because he described a platform I wished I had when I started grad school. From the same student executive team, Tom also found our Chief Database Officer, Elvis.

Once we had a team, we enrolled in our first incubator, the Hatchery under the Faculty of Engineering. During the Hatchery stage, we were assigned 2 mentors to help us conduct market analysis to see whether or not there is a business in our idea. We also tested a proof of concept, which we did by approaching other scientists at the University of Toronto to pitch our idea and see if anyone would be interested in the platform.

After the completion of the Hatchery during Fall of 2015, we were accepted into 2 more incubators: the Creative Destruction Lab (CDL) under the Rotman School of Management, and Health Innovation Hub (H2i) under the Faculty of Medicine. Over the course of CDL, we were paired with a graduating MBA student to refine our business model. We had monthly evaluation sessions with serial entrepreneurs to determine if our idea and technology would be viable, and what our potential valuation would be based on the business model. We were able to complete the CDL program, which only 10% of the companies from the beginning were able to do. The MBA student who worked with us, Liran, became our CEO.

After CDL, we were introduced to our last accelerator, Founder Fuel, in Montreal. For the entirety of Founder Fuel, we worked on a single task: to refine our pitch to investors in order to raise our first round of funding. At the end of Stage 1, we secured our pre-seed funding from a couple of angel investors and from Founder Fuel. 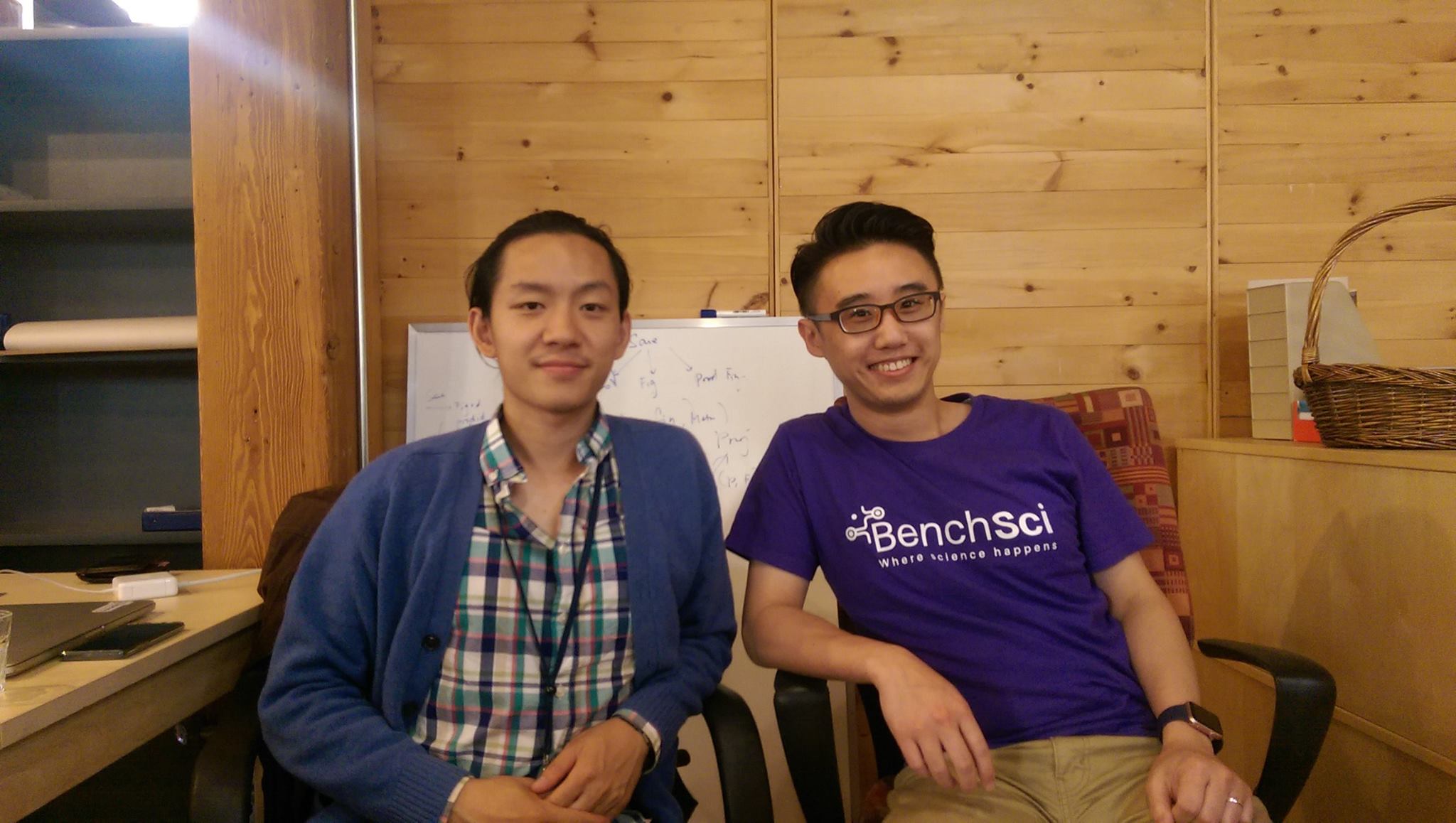 With the pre-seed funding, the 5 of us started working on BenchSci full-time. During this stage, we had 1 goal in mind: building the Minimum Viable Product (MVP), the very first version of BenchSci.

The purpose of the MVP was to show investors that we can actually build the technology, and also to use the MVP to test the market, which in our case, involves numerous meetings with scientists to demo the MVP and determine if they would be interested in signing up for the final version.

Our effort during this stage helped us raised the seed-round funding from 2 venture capital firms: Golden Venture Partners and Real Ventures.

With the seed-round funding, we doubled the size of the team so we could move faster, which is the essence of start-up. As Mark Zuckerberg famously said: "move fast and break things."

With more hands on deck, we improved the platform both in database size and usability, and we launched BenchSci beta in Toronto and 10 cities in the US. The focus of this stage was to prepare for our official launch. The engineering and science team had 1 goal, to add more data and improve the platform usability, and the business and marketing team had 1 goal, to build as many relationships with potential users and business clients.

Our collective effort during the expansion phase impressed our investors, and they doubled their investment so the company can move even faster and be more mature before we raise the Series A round. And this is where we are today at our seed-plus round.

We doubled the team again and hired more engineers and scientists. We launched the platform officially in July, 2017, and our goal during this stage is to actively acquire academic users and industry clients. We also started branching out out the platform, going from just antibodies to also include si- and shRNAs.

We've accomplished much over the past 2 years. I hope our story so far outlines a more definitive path to starting a company, much like a step-by-step experimental protocol, to guide you on your own unique entrepreneurial journey.

In part 2 of this series, I will write about the things I've learned so far, and why entrepreneurship could be an ideal career path for life science PhDs.

Do you have any question that you'd like me to answer? Let me know in the comment section below, and follow us on our social media:

Progress Towards Therapeutic Applications of CRISPR-Cas9
7 Tips to Apply for a Non-Academic Job with a Life Science PhD
This One Question Improves Every Project: What's My Role?