Why Speed Is One of Our Core Values

In 2000, I got lucky. I graduated from university straight into a dot-com health startup. We built a portal to connect chiropractors with their patients. We grew our revenue, users, and team fast—from 10 to 40 people in about a year.

Then our leadership and investors decided to pivot. Instead of building a portal for one vertical, we would create a technology platform to launch portals for any vertical—from accountants to massage therapists. We fired most of our sales team and let the chiropractic portal languish. Our revenue and user growth stalled as we focused on perfecting our new technology. We thought we had some time to figure it out—these were dot-com years, and companies raised millions on ideas alone.

In March 2001, the dot-com bubble burst, with the NASDAQ eventually losing 78% of its value. The terrorist attacks of September 11 rocked the world and changed its mood from optimism to pessimism. Then Enron filed for bankruptcy on December 2, the largest corporate bankruptcy in US history—until the WorldCom scandal the following year. Investors got spooked and venture capital dried up, dropping over 700% by the end of 2002. We ran out of money, couldn't raise more, and had to close. A partner for whom we failed to deliver on a contract took all of the technology and content we worked so hard to build.

Yet, I still consider myself lucky. One reason is that I learned three critical lessons about health-tech startup success that I've applied ever since: speed is existential, time is life, and momentum is precious. Here's how these lessons apply at BenchSci, helping to explain why "speed" is one of our core values.

By their very definition, startups have to be quick. As Y Combinator cofounder Paul Graham eloquently explains, "A startup is a company designed to grow fast." If your company isn't growing fast, it doesn't meet the definition.

Accordingly, growth rate is the most critical health indicator for a startup. Ideally, this is revenue growth. If not, then at least active user growth.

Growth rate is critical because small variations can produce vastly different outcomes, as shown in the chart below. Take two companies, each starting with 1,000 users. Company A grows its user base at 20% per year. Company B at 100% year. After five years, company A has about 2,074 users while company B has 16,000. A 5X difference in growth rate results in a nearly 8X difference in results. 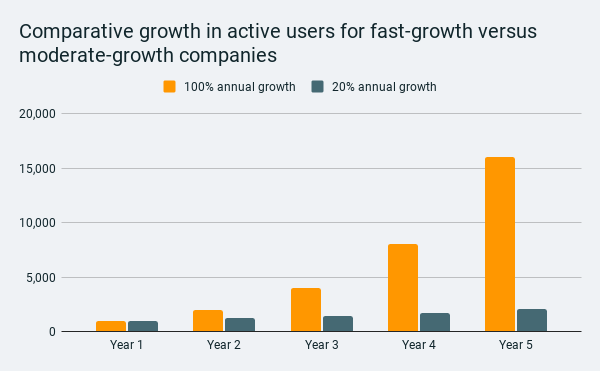 And importantly, even moderate growth of 20% isn't sufficient for most startups to survive. According to McKinsey, software startups with a growth rate of 20% have a 92% chance of shutting down within a few years of launch.

So it's not enough just to grow. You have to grow fast enough to escape the many risks that can destroy a business—such as competitors, a tanking stock market, a funding desert, or a world-changing black swan event.

More than 350 million people suffer from about 7,000 rare diseases. Most of them have no good treatment options. Half start in childhood. And around one in three children with a rare disease won't live past their fifth birthday.

More than 80 common diseases are incurable, many with poor treatment options.

So every minute matters.

Once you attain a healthy growth rate, you must fight to maintain it.

Most companies don't grow consistently. About 85% of fast-growing companies can't sustain their momentum. Of these, more than three-quarters can't get that momentum back.

You might think that this implies the need for a continuous high-stress environment. But the opposite is true. Companies that put all their energy into short sprints fail in the long run. Burnt-out teams don't move fast.

The goal is sustainable speed. That's the sweet spot.

It's hard to strike the right balance, but as I've experienced, there's no alternative. Startups have to grow fast for the long-term to survive. And since our work empowers scientists to help millions of undertreated patients, failure can't be an option.

Thanks to Mark Kostove, Hassan Muhammad, and Bryn Knox for their contributions to this post.

Think FASTT: How We’re Promoting Our Values Remotely in Hypergrowth
How the 80/20 Principle Improves Focus in a Fast-growing Startup
Seven Imperatives to Maintain Speed While Scaling a Startup