Progress Towards Therapeutic Applications of CRISPR-Cas9

CRISPR-Cas9 is without a doubt the hottest topic in the biomedical research community today. While CRISPR-Cas9 is being widely adopted in basic research, it's clinical potential is also being explored by several companies. In this guest blog, Mark Lojacono will summarize the recent advances in the CRISPR-Cas9 technology, both in the basic research and in the clinical settings.

When people hear the phrase "gene therapy," they may think of a treatment involving the use of drugs to treat genetic diseases by turning genes in your genome on and off like light switches. But could a drug that can edit your genome be on the market sometime in the near future? Will genetic diseases such as cystic fibrosis or cancer be more treatable in part because of gene editing therapies, similar to the impact of vaccines and antibiotics to medicine in the 20th century? Potentially, but progress in gene editing therapies depend on the specificity of the editing mechanism and an effective delivery system to allow the modulation of gene expression in cells and tissues. 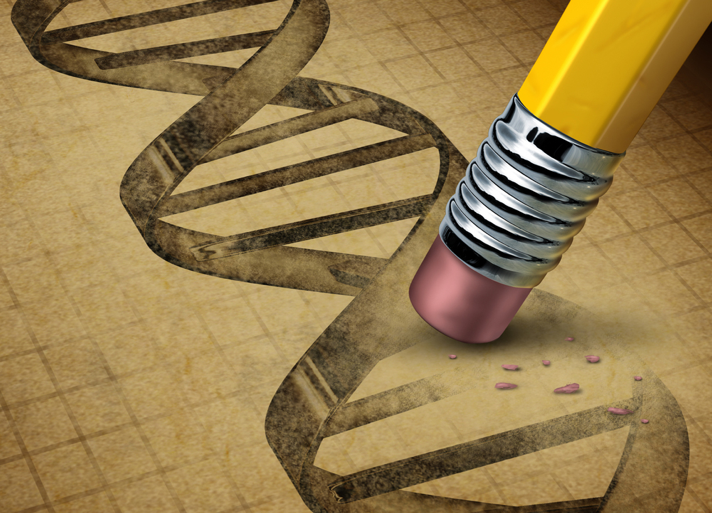 The Rise of CRISPR-Cas9

Much progress has been made over the last couple of decades regarding the modulation of gene expression. These research efforts have focused on proteins that cause double-stranded DNA breaks like zinc-finger nucleases (ZFNs) or transcription activator-like effector nucleases (TALENs) along with mechanisms to silence gene expression like RNA interference (RNAi). However, since 2012 the hottest topic in gene editing has been CRISPR-Cas9 (Clustered Regularly Interspaced Short Palindromic Repeats). As a conserved relic of the ancient warfare between viruses and bacteria, CRISPR-Cas9 involves a complex in which a programmable “guide” RNA detects particular DNA sequences. This guide RNA can then direct the Cas9 nuclease to cut a targeted sequence that would then allow modifications using DNA repair mechanisms. The use of CRISPR in its flexibility and ease of use in the lab have opened up extensive possibilities for many applications ranging from pharmaceuticals to agriculture.

Challenges and Recent Advances in CRISPR-Cas9

While CRISPR-Cas9 may have many benefits in terms of its ease of use in laboratory settings, it’s not without drawbacks. As an example, the Cas9 nuclease may cut different targets if there is a slight mismatch between the guide RNA and the target sequence. A mismatch could then result in an inadvertent effect on expression of other genes within a similar region of the genome. This presents problems for CRISPR in therapeutic applications, as any non-specific gene edits would result in unwanted side effects. In light of this limitation, further advancements have been made to fine-tune Cas9 to prevent the cutting of unintended targets prior to degradation. These advancements involve neutralizing the positive charge of Cas9 to make it adhere less to negatively charged DNA, as well as the development of molecular switches to suppress Cas9 cutting activities. Most interestingly, there are also advances towards the use of next generation sequencing and big data to design more specific guide RNAs for personalized treatments.

A major significant challenge for CRISPR therapies involves the delivery of the CRISPR-Cas9 complex to cells and tissues directly in vivo and many investigations have focused on potential delivery mechanisms with variable effectiveness. Studies researching in vivo treatments have primarily focused on the use of viral vectors in which viruses are utilized as a “Trojan Horse” to insert their material into cells. But there are problems with this method involving immunological responses and toxicity, not to mention the relatively large size of the CRISPR-Cas9 complex. Other non-viral methods of delivery that are currently being examined include micro/nano-injection directly to target cells as well as the usage of lipid or polymer-based nanoparticles to facilitate effective delivery of the CRISPR-Cas9 complex.

Six years after the rise of CRISPR out of obscurity, where do we now stand on the therapeutic applications of CRISPR in treating genetic diseases?

More recent advancements in CRISPR-based therapies as of late involve ex vivo therapies in which gene editing takes places in cells cultured outside of the body and are then subsequently infused back into the patient. Therapies targeting multiple diseases have started to undergo clinical trials in China with more planned throughout this year and into 2019 in the US and Europe. One notable trial to begin sometime later this year by CRISPR Therapeutics in Cambridge, MA will focus on the treatment of sickle cell disease and beta-thalassemia. This treatment (known as CTX001) involves the extraction of stem cells from bone marrow and subsequent genetic alteration with CRISPR to make cells produce an altered form of hemoglobin to be infused back into the patient. Other companies, such as Editas Medicine and Intellia Therapeutics, are also developing similar therapeutic applications for CRISPR for both in vivo and ex vivo treatments.

The advancements of CRISPR-based therapies have led to seemingly limitless possibilities in potential treatment applications. However, effective clinical translation leading to commercially available treatments still have significant barriers to overcome for the time being. Until the challenges of delivery and specificity are addressed (not to mention various legal and ethical issues), the days when gene editing therapies become a primary form of treatment for genetic disorders may still be quite ahead in the future.

Empowering Scientists: Why I Work at BenchSci
A Science Career Beyond the Bench
Helping Scientists Through Effective Communication