Recent advances in automated microscopy technology have resulted in a dilemma: Images can be generated at a much faster rate than researchers can possibly analyze them. This inefficiency makes it difficult to conduct certain types of experiments on a large scale, and delays the drug discovery process.

Allison Nixon experienced this bottleneck first-hand while conducting high-content imaging during her PhD in Molecular Genetics at the University of Toronto. Naturally, when she heard about a Toronto startup called Phenomic AI that is applying AI to solve exactly this problem, she decided to be a part of their solution.

To learn more about the company and their technology, I sat down with Nixon (left), as well as Max London (center) and Elizabeth Koch (right) - three PhD biologists at Phenomic AI who were drawn to this intersection of biology and AI. 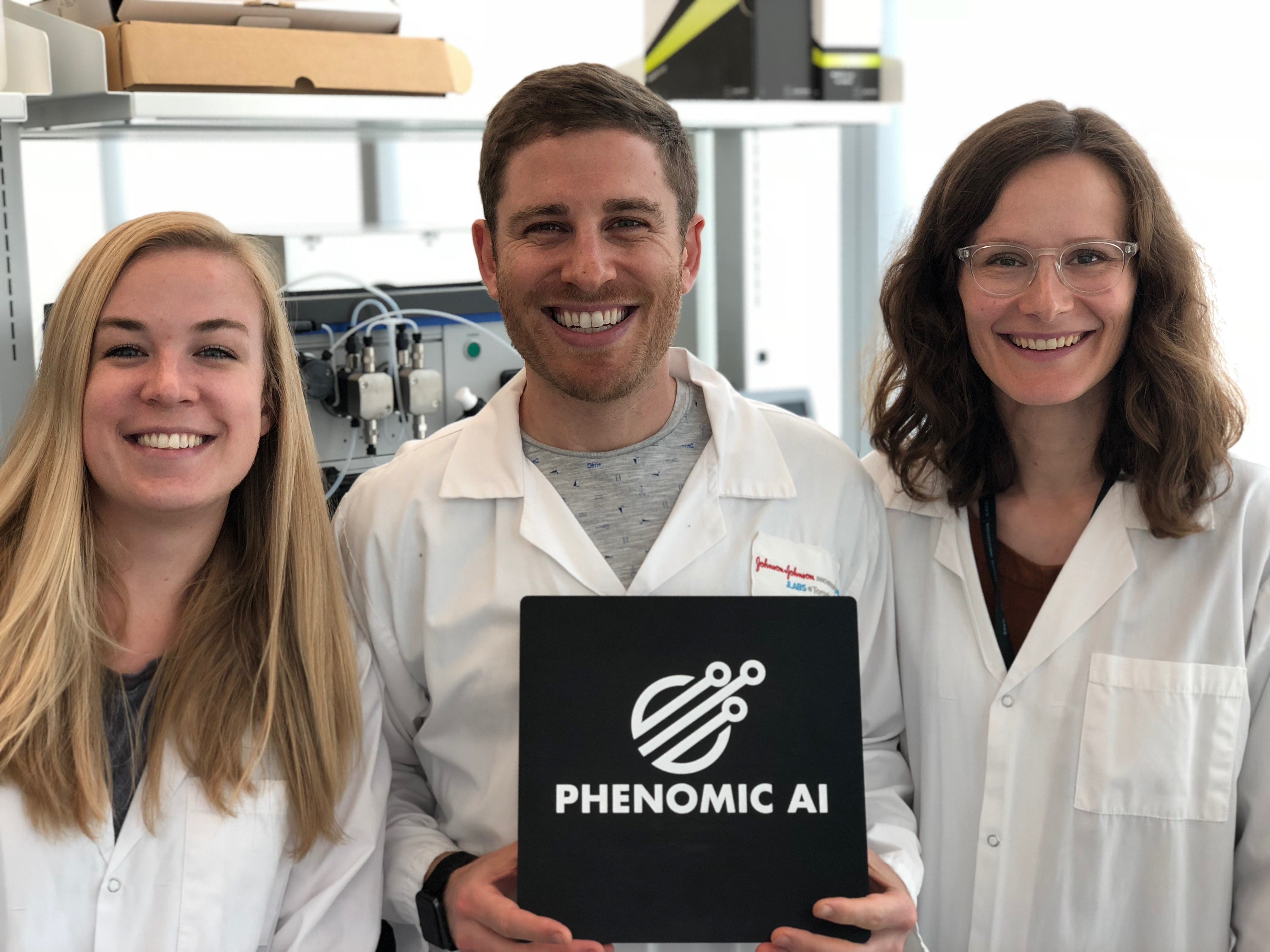 Phenomic AI was founded by Oren Kraus and Sam Cooper, who banded together to develop a specific application for the machine learning technology that Oren had developed during his PhD in Computer Science at The University of Toronto.

This technology analyzes microscopy images to bridge the gap between image collection and analysis. The AI is able to interpret microscopy images much faster and with even more accuracy than a human scientist (by ~20%). “They decided that they could apply some of [this technology] to solve a problem related to drug discovery,” says Nixon.

Most drug discovery strategies begin with a druggable target that is responsible for the disease. Then, you screen for drugs that can modulate the target’s activity at the molecular level in a desirable way. One concern with target-based approaches is that molecular characterization can result in compounds that fail once they reach animal models or clinical trials because the molecular change may not result in the desired phenotypic effect.

However, the known pool of druggable targets is limited (Gashaw et al., 2011), and as Nixon points out, “We’re running out of targets.” Companies are scraping the bottom of the barrel for new drug targets.

By applying their AI-driven image analysis technology, Phenomic AI is able to approach drug discovery in a broader fashion, by high-throughput phenotypic screening.

A phenotypic screen doesn’t rely on a known drug target, but instead aims to identify molecules that alter a cell’s phenotype. “You can apply this model to a screen to discover a drug that makes an unhealthy cell look more like a healthy cell, and that’s where the AI comes in—to analyze all the microscopy data,” says Nixon.

Because the phenotypic changes in their drug screens are observed with microscopy, Phenomic AI uses their proprietary technology to interpret the images at a much quicker rate, and analyze phenotypes in a high-throughput manner. “As a biologist, I can reasonably look at, say, 100 drugs in a plate, and it might take me a couple hours,” says London. “Rather than looking at 100 drugs at a time, once we’ve trained the AI we can look at thousands or hundreds of thousands of drugs at a time.”

In addition, the AI can pick up on novel differences and patterns in the images that a human scientist may not notice. “Sometimes machine learning will find something that we didn’t know we were looking for," says Nixon.

By combining a phenotypic screening approach with their image analysis technology, biologists at Phenomic AI can screen entire existing drug libraries to look for new or unexpected effects that may not be detected in targeted approaches.

Much of Phenomic AI’s work relies on selecting the right antibody probes that will result in high-quality microscopy images. To inform their decisions about which products to use for each experiment, the team uses another tool that was developed in the Toronto AI community: BenchSci.

Phenomic AI uses BenchSci to scan the literature and vendor specifications for antibody usage and validation data. They also use the filters to narrow down the results based on various parameters of the available antibodies such as species of the host, and clonality of the antibody.

Using these filters, they can prioritize monoclonal and recombinant antibodies due to their enhanced consistency and reliability compared to polyclonal antibodies, which is important to ensure that the assays they design are scalable.

With regards to the utility of the BenchSci platform, says London, “I think it’s more useful than [Google Scholar or PubMed].”

Today, Phenomic AI is accelerating the road to drug discovery by automating the analysis of microscopy images in high-throughput phenotypic screens, but it doesn’t stop there. They plan to continue to integrate AI with every stage of the research process, to further increase the speed and efficiency of scientific discovery. BenchSci will continue expand with them, growing our technology and reagent data to meet their future needs.