How We Maintain Our Sense of Community While Working Remotely

It's been over a year since we first moved to a fully remote work model due to the global pandemic. We're very fortunate to have adapted well to our new circumstances and continue our mission of helping scientists accelerate life-saving biomedical research. Still, we've had our challenges to overcome.

One of these challenges has been maintaining our sense of community and camaraderie without the daily face-to-face interactions that we enjoyed in normal times. We can no longer just lean across our desk to ask a colleague a question or catch up when we pass someone in the hall. Instead, we have to book a Zoom call, which, in respect of each other’s time, we generally try to avoid unless we have a good reason. The unfortunate results are that relationship building is more difficult, and work can start to feel more transactional and less like a team effort toward common goals.

Luckily, our team is full of wonderful people with a wide variety of interests and a willingness to organize fun activities we can all bond over while participating safely online. Connecting with each other outside of work duties helps us build those personal relationships which we are missing otherwise. We wanted to share a few of these activities here with the hope of inspiring others to consider what they might do to maintain or improve their own work communities in these difficult times.

Rock-paper-scissors; it's the classic schoolyard game that has endured the ages. In 2020, we organized the first-ever BenchSci RPS Legends tournament, which ran in-person at the office during lunch hours. It was a great success, despite some officiating errors during the big finale that necessitated a slow-motion replay (to the amusement of everyone in attendance). The winner was awarded the now-coveted purple RPS Legends BenchSci hoodie.

The BenchSci RPS Legends tournament was received so enthusiastically that we decided to hold one every quarter. Unfortunately, COVID arrived here soon after, and we were forced to rethink the logistics of the event. Thankfully, one of our communication tools, Slack, had us covered with their convenient rock-paper-scissors app, allowing us to play remotely in the Slack environment, which we already use every day.

This method greatly exceeded expectations, proving even more efficient than the in-person version. It allows for games to be played asynchronously throughout the day, with competitors submitting their selections as their schedules permit. It also lets people watch the game unfold and interact through Slack chat to build anticipation and create a fun, competitive vibe. We take our work seriously, but everyone needs a break now and then. Rock-paper-scissors is an excellent pressure-release and helps us connect to get through this challenging time together. So far, we’ve held five RPS Legends tournaments, and we’re looking forward to the next one starting soon! 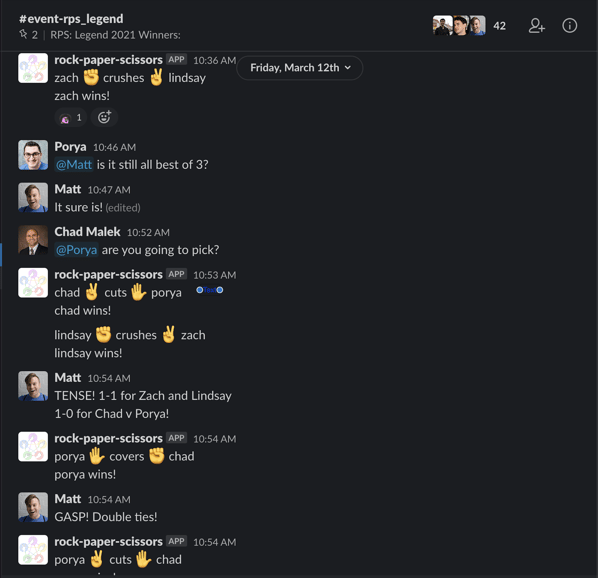 Sheep is a trivia game along the lines of Family Feud, where points are awarded based on an answer's popularity. Near the beginning of COVID, while looking for new pandemic-friendly activities, one of our team members recalled fond memories of playing Sheep in university and thought others at BenchSci would enjoy it. Thus began a new BenchSci tradition.

Every month, a new Sheep quiz is created and sent out to the company via Google Forms. Questions could be about anything; some center around BenchSci or current events, others might be about personal preferences or opinions, or any other random thing. Quizzes often have an overall theme and are injected with plenty of humor. It's a quick and easy activity that anyone can participate in, and it's heavily luck-based, so anyone can win (although one BenchSci team member has won a disproportionate number of times, so maybe there’s more than just luck involved). 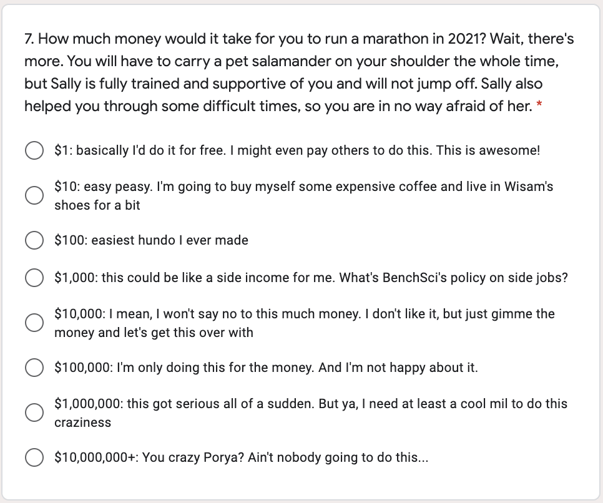 One of the questions from the latest round of Sheep.

After quizzes are submitted and points are totaled, everyone gets to see how other people answered. The best part is the (often hilarious) discussion that inevitably ensues as we bond over the new fun, interesting, or strange facts we've all learned about each other.

With RPS Legends and Sheep already established as team favorites at BenchSci, a chess enthusiast on our team took the cue and proposed a company chess tournament. Since then, we've held four chess tournaments, with interest growing each time.

Participants in the tournament schedule games in Google Calendar, while lichess.org serves as a conveniently accessible platform to host the actual play. Everyone else gets to watch the game unfold on the website while discussing the action with their fellow audience members via group chat or Zoom call. There's also a play-by-play recap after each game.

The chess tournament provides a great way for people who enjoy more skills-based activities to connect. It's even inspired some people to reach out to colleagues and start their own ad-hoc games.

As a health-focused company, it only makes sense that we would gamify exercise. The Great BenchScian Plank-off is another thing we did this past year to indulge in a bit of competitive fun, this time while also getting healthier.

The plank-off ran tournament style, with two participants facing off against each other to see who could hold their plank the longest while everyone else cheered them on over Zoom. The winner would advance to the next round until a champion was declared and awarded a brand new ab-roller. The final round was particularly intense, with both finalists holding their planks for over ten minutes! It was a great way to connect while encouraging each other to get in better shape.

FASTT Talks are still a relatively new idea; we’ve only had four since the first one in March of this year. But they instantly became a massive hit with our team.

A FASTT Talk, which takes its name from our FASTT values, is a five-minute presentation on any of the presenter's passions, hobbies, or predilections. People have presented on topics including but not limited to:

As you can see, pretty much anything is on the table. We have FASTT Talks on a monthly basis, with four to five people each presenting over the course of a half-hour at lunchtime. It’s another great way to learn about each other’s interests and maybe pick up a few trivia facts along the way.

A BenchSci FASTT Talk on what makes a Grammy-worthy pop song.

In difficult times like these, it's more important than ever that we make efforts to let the people around us know we're there for them. Online activities allow us to connect with our colleagues more socially and build meaningful relationships with them. Maintaining our sense of community makes us a better team, and it also makes the workday more enjoyable.

Check out our Careers page to learn more about working at BenchSci.