Before April 2020, I updated this post monthly. But I can no longer keep up with developments in the use of AI in drug discovery. So I no longer update this post. If you have interesting trends to share, please do so in the comments. 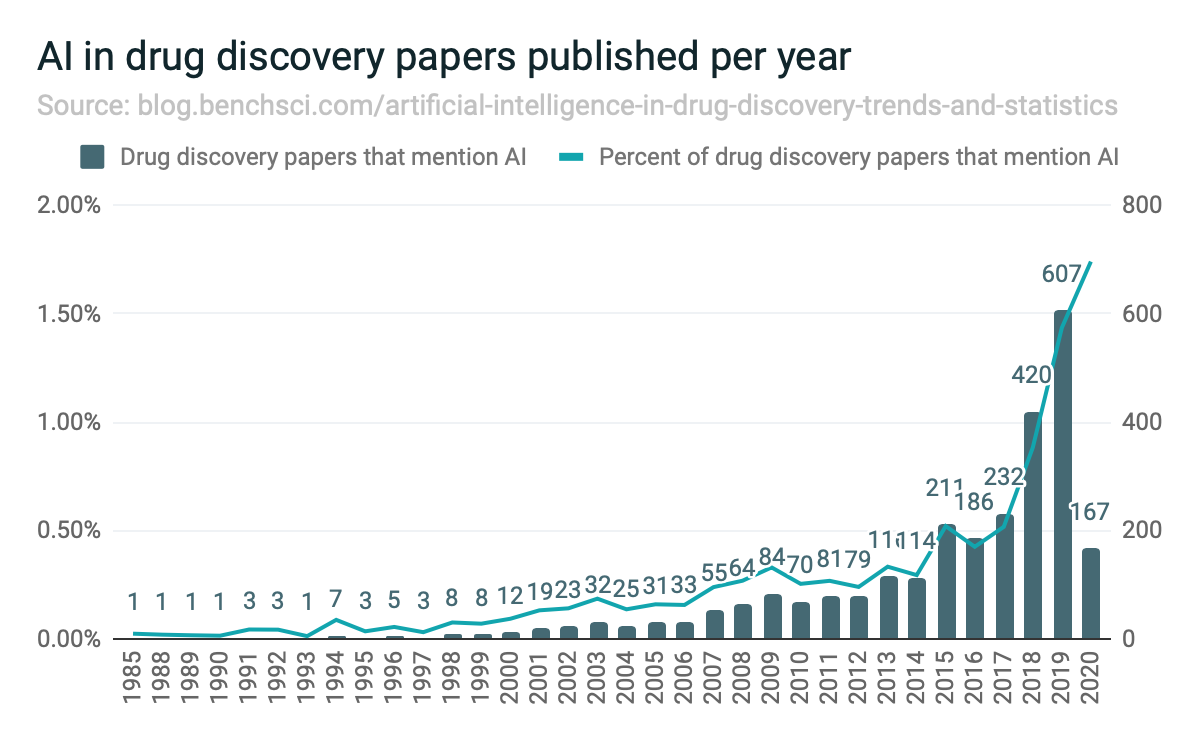 Startup formation may be slowing

Data I've gathered suggests that AI drug discovery startup formation has peaked. It's possible this will change as I become aware of newer startups not in my database. But my qualitative sense of the market aligns with the quantitative data. We may have hit peak startup.

Most startups focus on new or repurposed entities

I use somewhat arbitrary categories in my startups post. But they're descriptive. And as this chart shows, based on the data, the majority of startups focus on new and repurposed molecular entities. This includes generating novel drug candidates, repurposing existing drugs, designing drugs, and validating and optimizing drug candidates. In fact, this represents more than half of activity amongst startups. This also means there is far less competition in other areas of the drug discovery process. (PS: Sorry some of the labels got cut off. It's an issue with Google Sheets, from which I generate the charts. I'll see if I can fix it in future.)

Oncology, neurology, and infectious disease are the therapeutic areas with the most candidates

Using data I've gathered on drugs in the AI in drug discovery pipeline, I wanted to look at where companies are focusing their efforts. Similar to biopharma overall, oncology is well in the lead, followed by neurology and infectious disease.

Investment continues to increase, but the pace is slowing

Funding has increased every year since 2016. And there were huge increases year-over-year in 2017 and 2018. But the pace of growth appears to be slowing as the market matures. 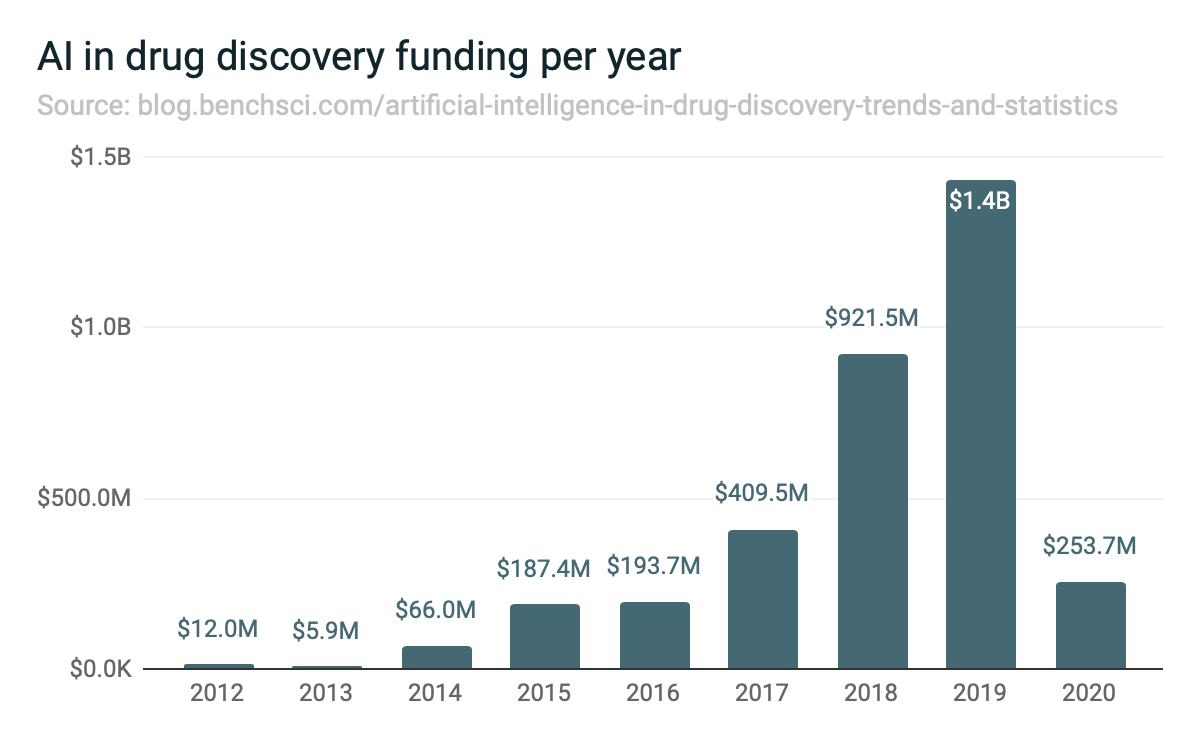 Funding data looks a bit different when you focus on venture capital only. Rather than slowing, venture investment is maturing, with later stage funding increasing. 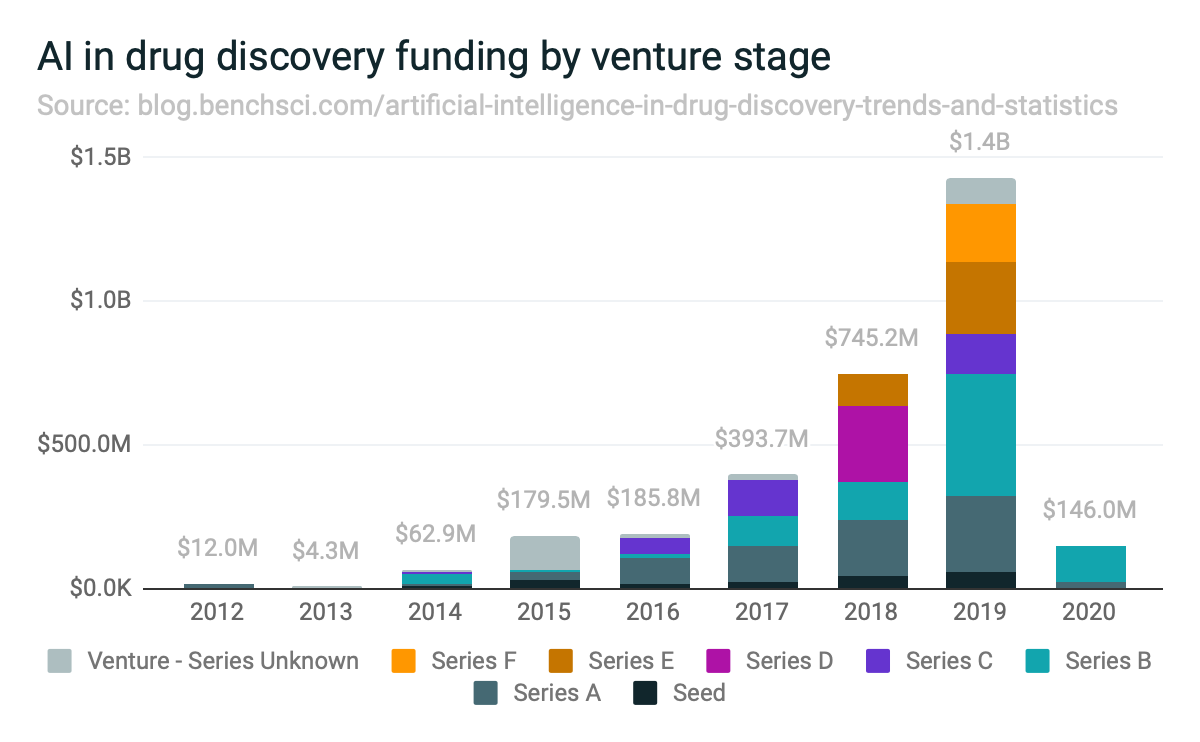 A few companies get most of the funding

We would expect the 80/20 rule would apply to funding of AI in drug discovery startups. Indeed, about 20% of startups have received 80% of funds. Here are the top 15: 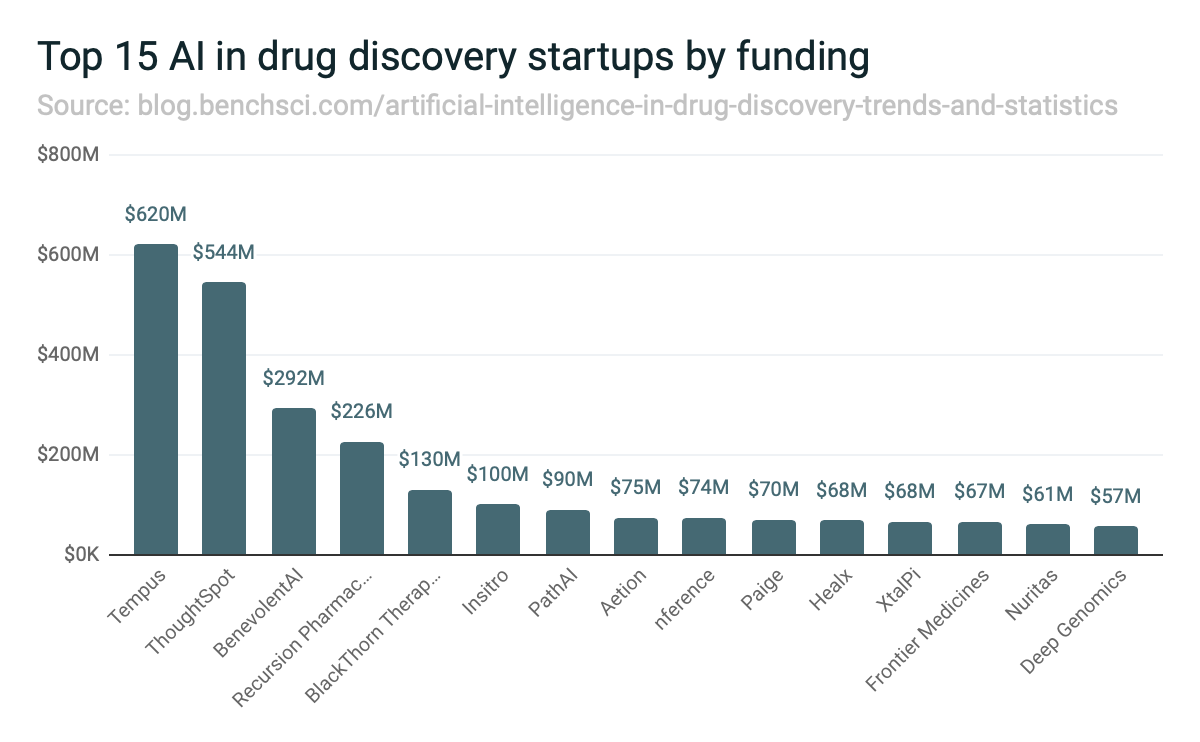 US startups dominate the industry

A few countries account for the majority of AI in drug discovery startups: 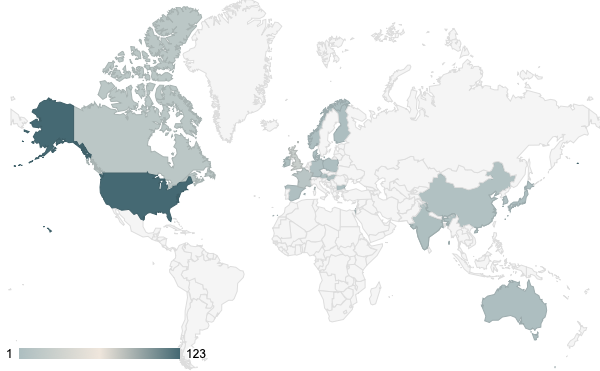 Among these countries, the US is by far the leader. And only a few countries have more than one startup on the list: 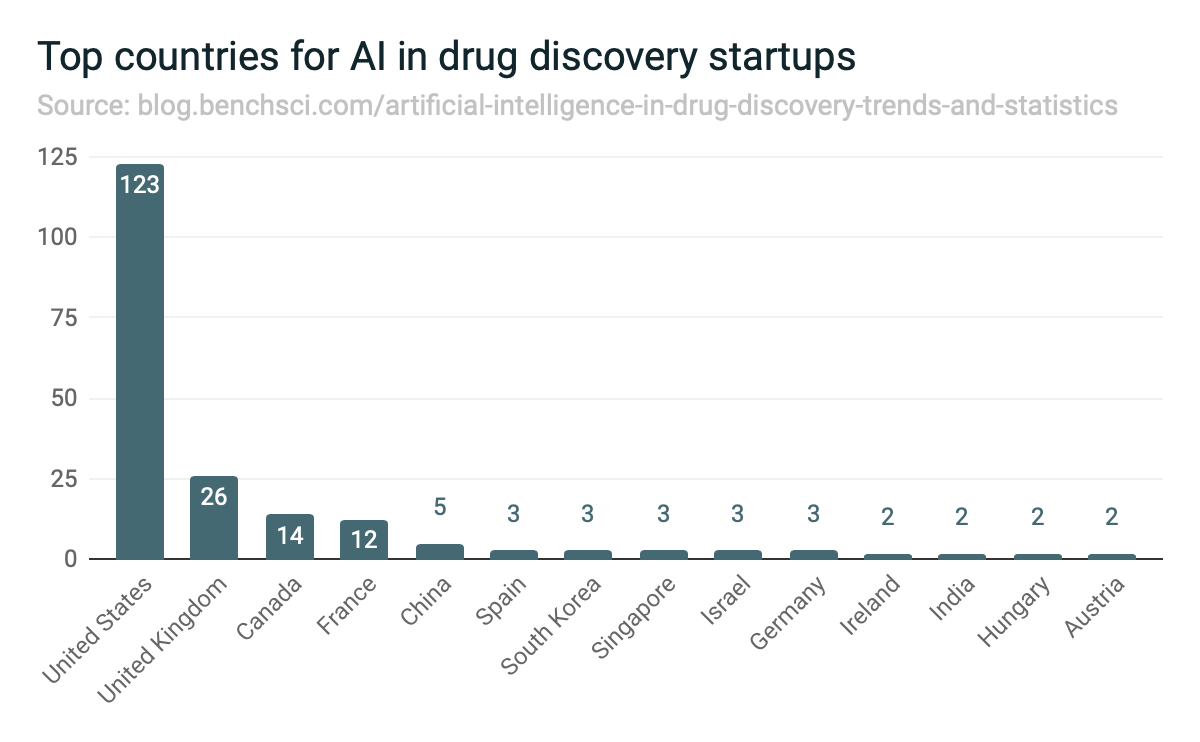 Several cities, including outside the US, have become hotbeds of activity

While the US dominates as a country, several dispersed cities have emerged as hotbeds. They have commonalities. They tend to be areas of high startup activity in general, like San Francisco. Or they tend to have strength in both machine learning and biology, like Toronto. 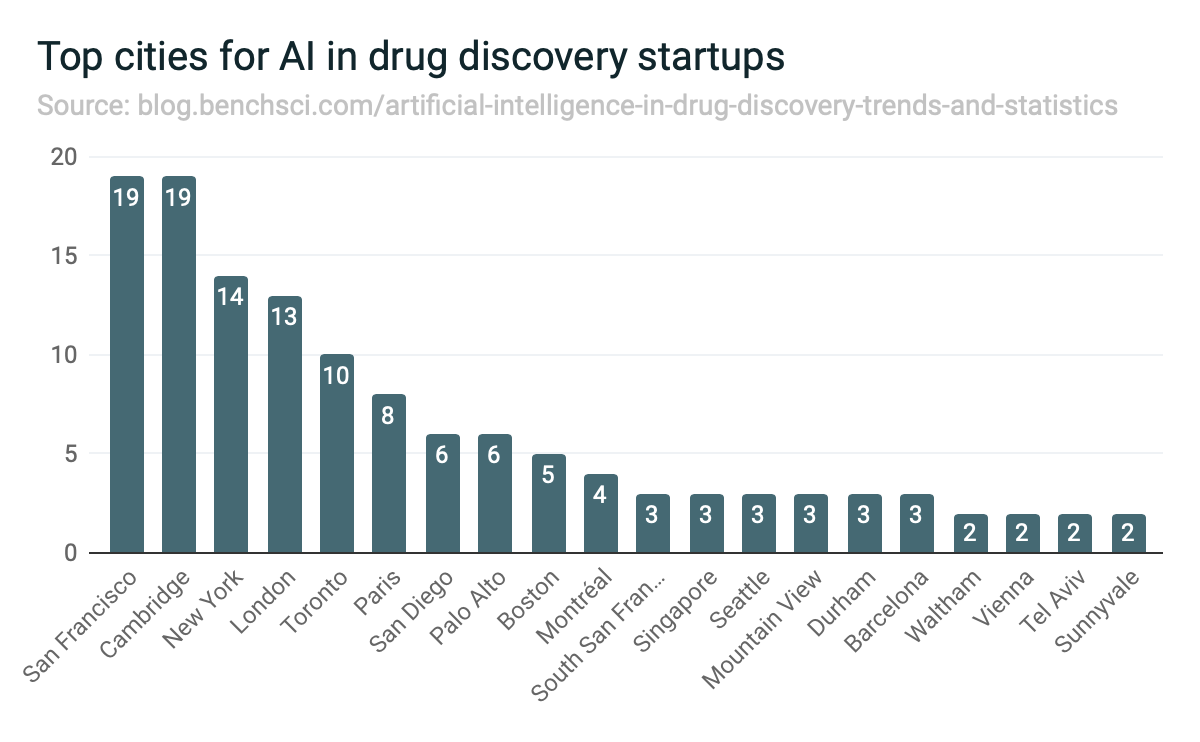 Methodology and next steps

I intend to expand this analysis over time. If you have ideas for trends and statistics you would like to see here, please post them in the comments.