Despite our best efforts, it’s been hard to measure adoption of artificial intelligence in drug discovery. Pharma and biotech companies tend to not publicly disclose competitive technology use.

So we went to the source. In partnership with The Science Advisory Board—a global expert network to advance science and medical technology—we surveyed 330 scientists in December 2017 who work in drug discovery.

The key takeaway: while organizations are adopting the tech, there’s significant untapped potential for those willing to be more aggressive. But the industry—and society—will only realize the potential with education and relevant success stories.

Read on to learn why.

Many Scientists Are Still Unfamiliar With AI in Drug Discovery 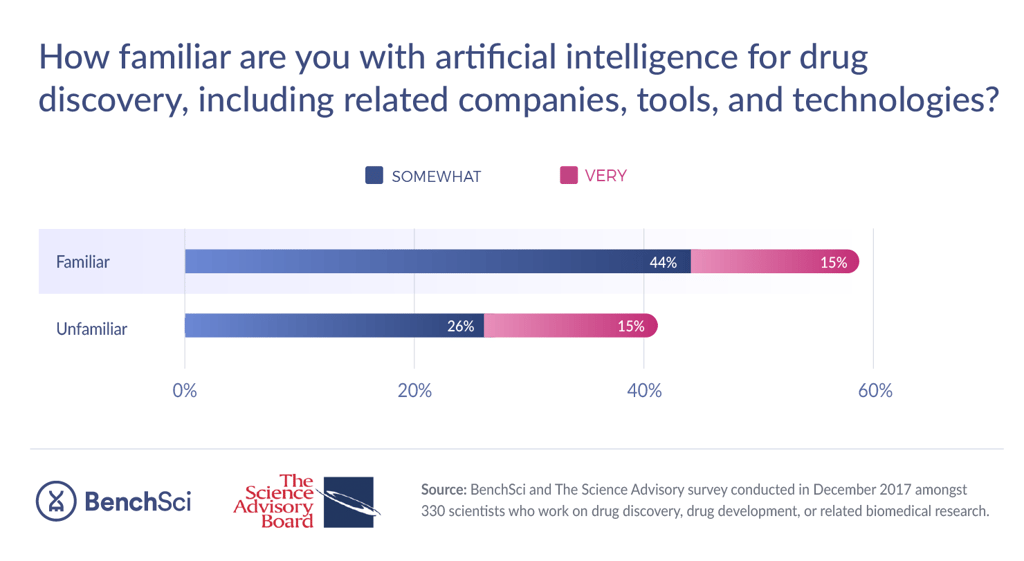 Given breakthroughs and extensive media coverage for AI in 2017—for example, AlphaGo’s victories—it’s perhaps unsurprising that 59% of scientists are familiar with it. But about 4 in 10 scientists working in drug discovery are not.

Most Use of AI in Drug Discovery Is Low Hanging Fruit 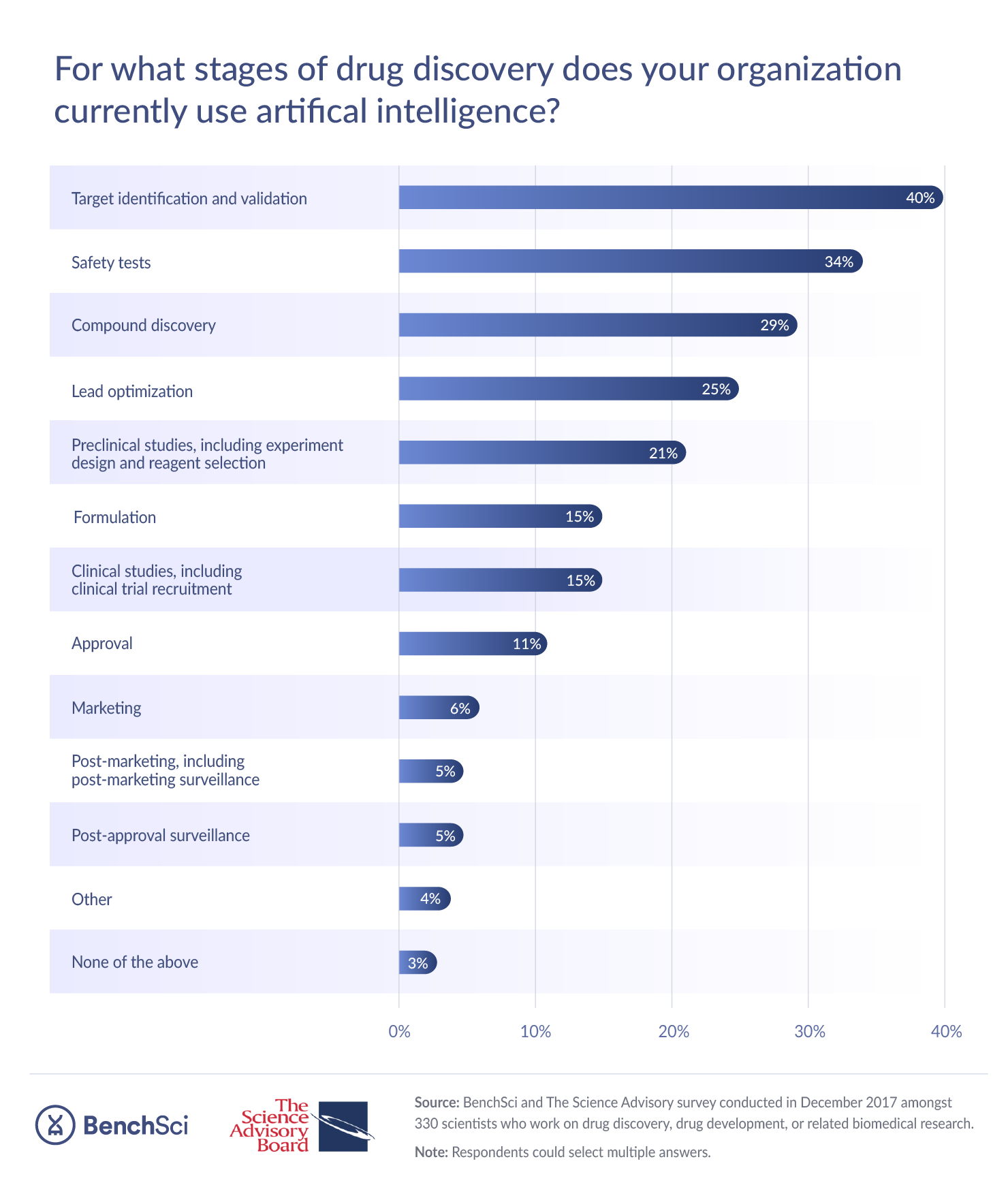 There are many AI drug discovery startups offering solutions for every phase of the process, from research to publishing. Yet among scientists whose organizations use AI, the focus is heavily on target identification and validation, safety tests, compound discovery, and lead optimization. There is untapped potential to explore other uses, from reagent selection to clinical trial optimization.

Speed Is the Biggest Perceived Benefit, but Gaps Remain Between Perception and Reality 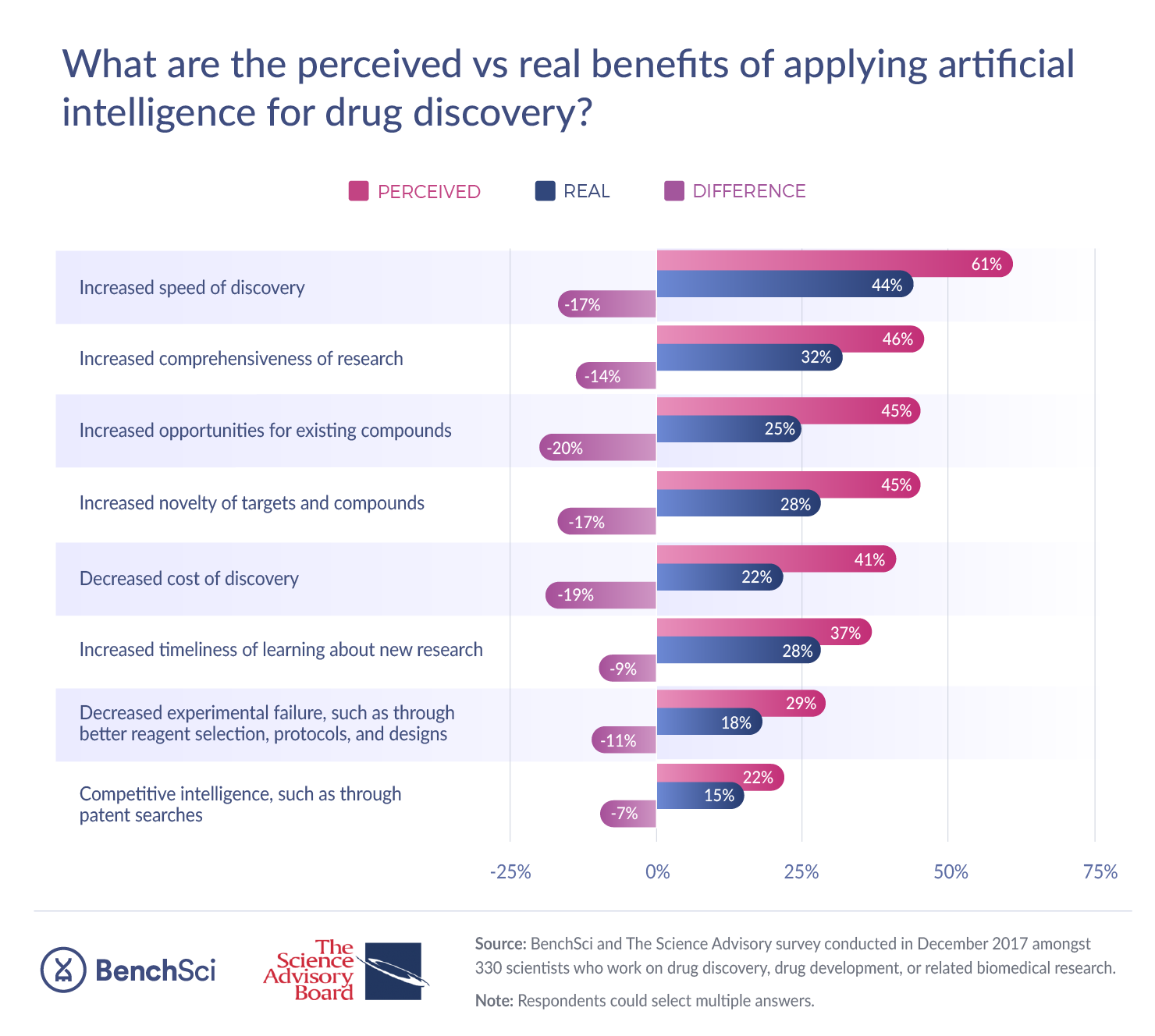 What drives interest in AI for drug discovery? Far and away, it’s increased speed of discovery, which 61% of respondents perceive as a benefit. This is followed by increased comprehensiveness of research (46%), increased opportunities for existing compounds (45%), and increased novelty of targets and compounds (45%). But gaps remain between perception and reality. On average, realized benefits are 14% below perceived, with the biggest gaps between increased opportunities for existing compounds (-20%) and decreased cost of discovery (-19%).

Few Organizations Have a Sense of Urgency 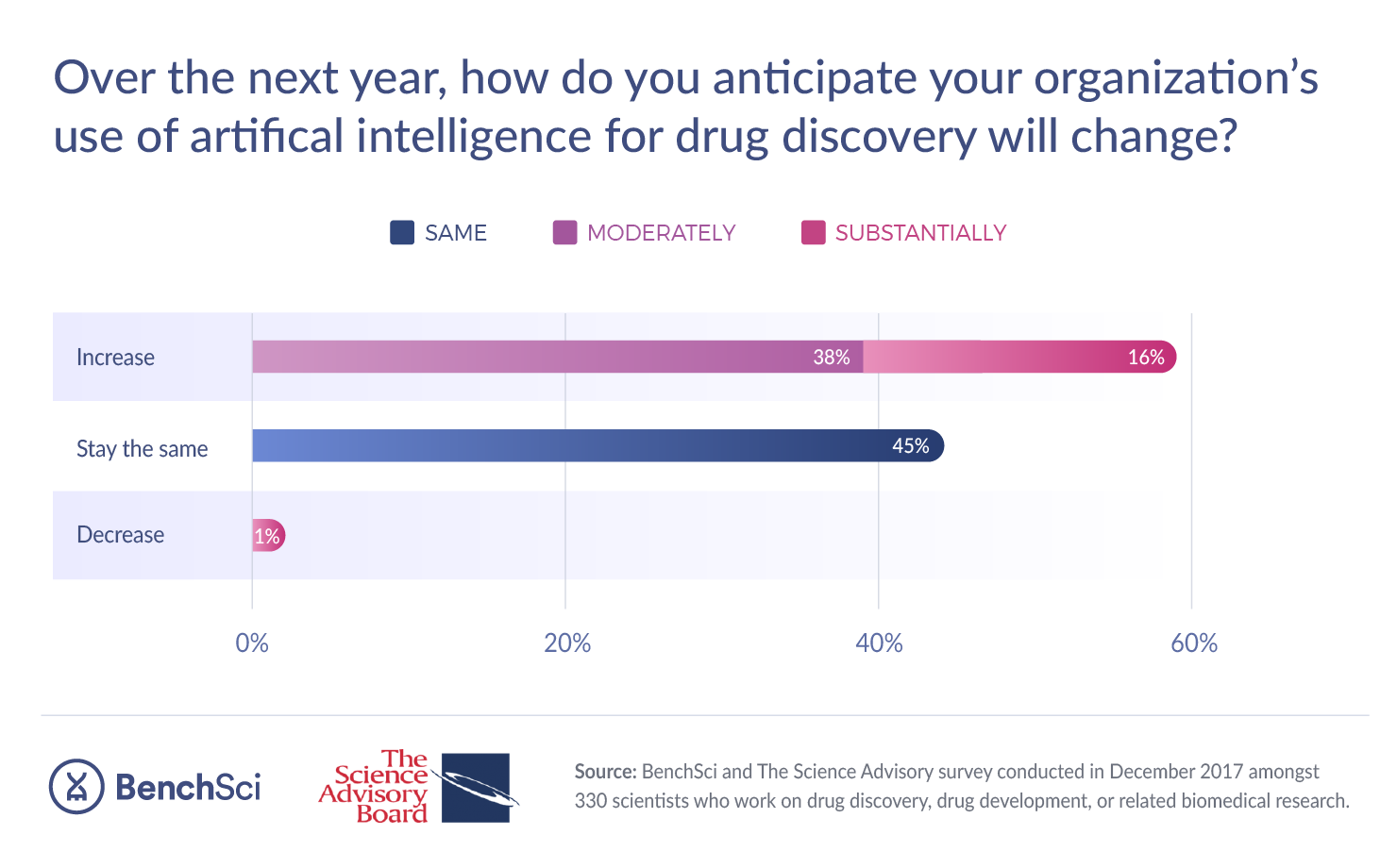 AI is progressing rapidly. The 2017 Artificial Intelligence Index (PDF) notes that published papers increased 9x per year since 1996, course enrolment increased up to 11x since 1996, startups increased 14x since 2000, and performance has exceeded or will soon meet human performance for object detection, speech recognition, and question answering. Yet while 59% of surveyed scientists anticipate their organization will increase use of AI for drug discovery in 2018, just 15% say it will be substantial. And 39% of respondents say that their organization’s use of AI will remain about the same as in 2017.

Lack of Knowledge Inhibits Use 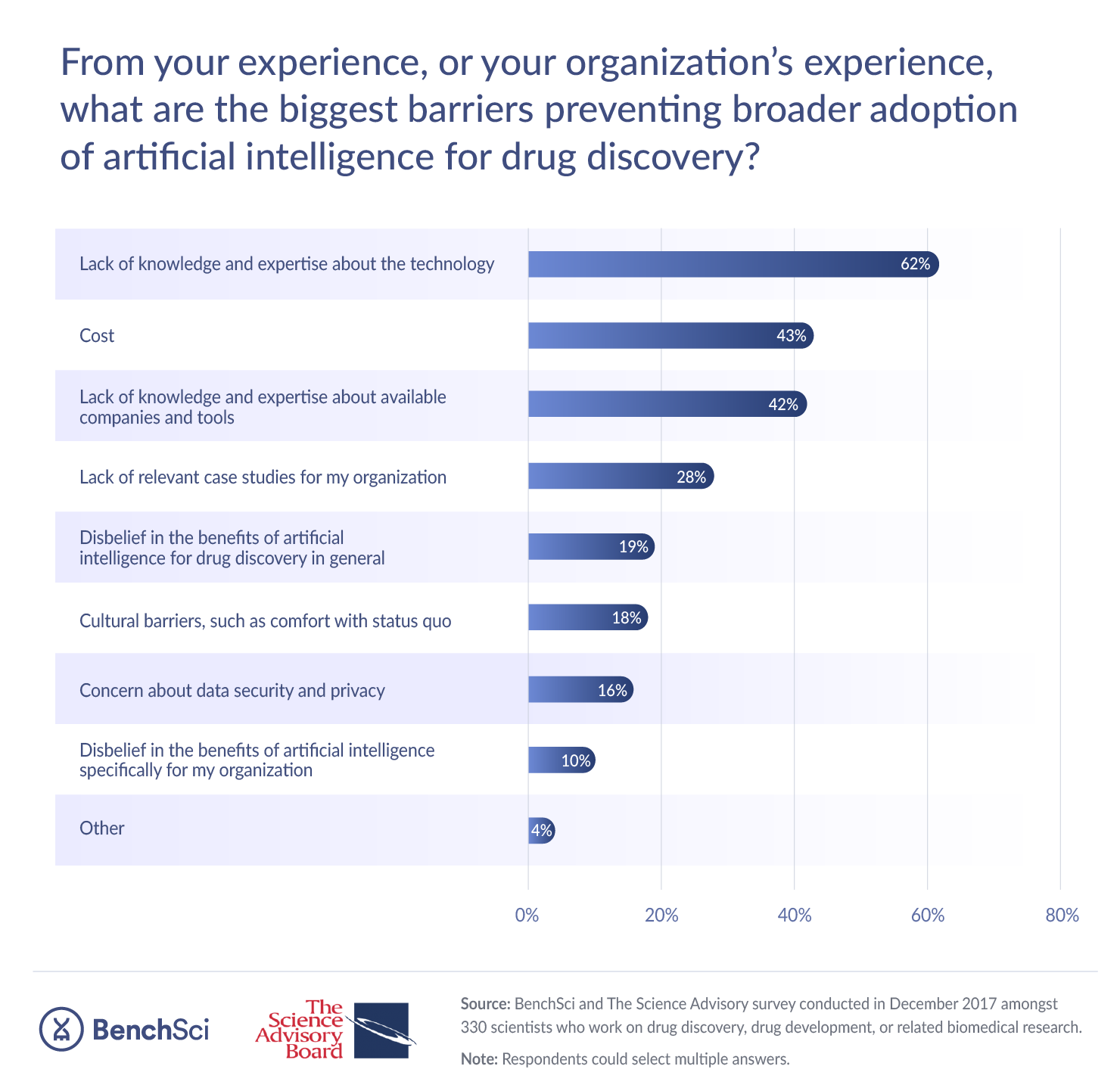 Why might so few organizations be planning aggressive application? My first assumption, having long worked at the intersection of technology and healthcare, was a culture of conservatism, or concerns about data security and privacy. But relatively few respondents (18% and 16% respectively) reported these. The biggest barrier? Education. This includes lack of knowledge and expertise about the technology (62%) and lack of knowledge and expertise about available companies and tools (42%). Many respondents (42%) also report concerns about cost, but given that the cost can be low and usage-based, my hunch is that this reflects a lack of education about pricing.

Education and Relevant Case Studies Are Key to Adoption 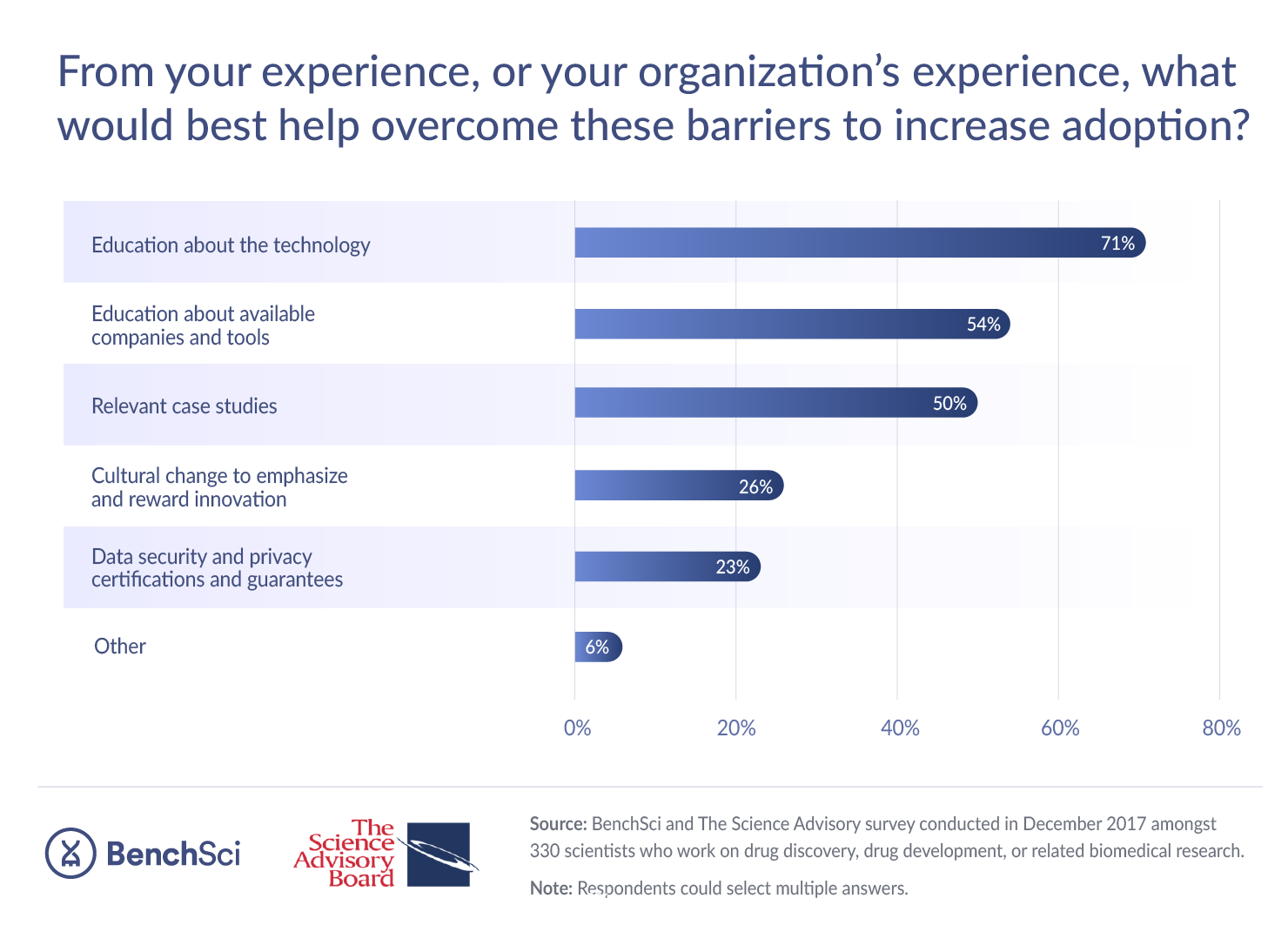 Given that lack of knowledge hinders adoption, AI startups take note: you must invest in education. Fully 71% of respondents say that education about the technology would help overcome barriers to adoption. But pharma and biotech companies have a role, too. They must more openly disclose and discuss successful (and unsuccessful) use, as 50% of respondents are looking for relevant case studies.

What Do You Think?

If you’re a scientist, an executive at a pharma or biotech company, or a leader at a relevant startup, I hope these results provide insight into AI drug discovery attitudes and adoption. Do they align with your experience? Please let me know in the comments, or feel free to reach out directly on LinkedIn, Twitter, or by email.

Also, if you’re a scientist and want to participate in future surveys, please join our friends at The Science Advisory board here.